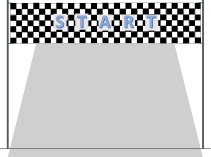 There are many different types of RF-Chokes, some are more simple, some are more complex.  Which one(s) you need depends on which problem(s) you are addressing, how much power you run, which antenna you are using, which band(s) the antenna works on, etc., etc.

This "sounds" complicated, but it is not really complicated.  If you can read and understand plain English, after reading the next couple of pages you will understand enough to make inteligent purchasing decisions...or even build your own. RF-Choke.

THINGS  YOU  MUST  UNDERSTAND

BEFORE WE BEGIN . . . let's first make sure we all understand one of the most important, yet most mis-understood points about BALUNS and RF-CHOKES:

1) "Balanced" with Respect to Transmission Lines:

In an ideal case, all current flowing through the shield is flowing on the inside surface of the shield of the coax.  This is due to "Skin Effect".

Differential current only flows INSIDE of the coax, so the current flowing through the shield is actually flowing along the inside surface of the coax.

At RF frequencies, the RF current actually sees the shield as two wires, not just one.  It sees the inside surface and the outside surface.

When current flows along the outside (outer surface of the shield), it is known as Common Mode Current (CMC).  When that happens, the feedline itself radiates as if it were part of the antenna.

An unbalanced coaxial transmission line should always have a balance of current with all current flowing inside of it and no current flowing along the outside of the coax shield.  When that is the case, we are happy campers.

Unfortunatley the return current seeing two paths (inner and outer surface of the shield) has no way of knowing which path to follow and will typically split and follow both paths.  At that point, with current flowing on the outside of the coax, we have Common-Mode-Current and the transmission line becomes a radiator.

A BALUN is a device associated with a transmission line.  It is NOT an antenna accessory!

Most people believe the purpose of the BALUN is to match  unbalanced transmission lines to a balanced antennas.   THIS  IS  TOTALLY  WRONG.

A BALUN does not 'match' anything.

Instead, it is a device for preventing RF-Current from flowing along the outside surface of the coax shield.   (please read that again)

This is the most important job of the BALUN

and why we use a BALUN in the first place.

In doing so, it forces the current to flow inside of the coax (where it belongs), along the inside surface of the coax shield, enabling the differential current, (explained above), to maintain its balance.

"THIS" is the "Balance" that the "BAL" in BALUN is referring to!

Certain types of baluns combine a balun with a transformer. These are called "transformer baluns" (i.e., 1:4, 1:9) etc.  However their choking ability is significantly worse than that of a 1:1 balun.

There are other types of "so-called" baluns which are good transformers but very lousy baluns - the worst being the single-core 4:1 Guanella (current) balun.  Unfortunately there are many commercial BALUN suppliers still selling this inferior product.  Baluns will be handled in more detail in another section of my web.

More Info:  See:  BALUNS: What They Do And How They Do It

2)  "Balanced" with Respect to Antennas

We are talking about a 'balance of impedance'  to the reference plane (ground) of each half of the antenna!

It is the imbalance of impedance between the two halves of the antenna that CAUSES  an imbalance of current, not the other way around!

This imbalance of current then causes the feedline to radiate, and other bad stuff. 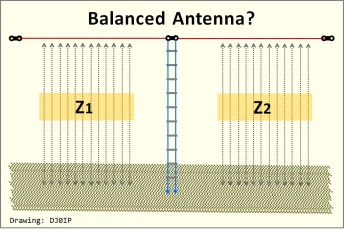 NORMALLY, when we think of a dipole, especially when it is fed with a Balanced Feedline such as Open-Wire, we consider this antenna to be balanced.  Physically it is balanced.   But is it electrically balanced?

Unless we mount the antenna high in the air, several wavelengths above ground, there is always capacitive coupling between the wire legs of the antenna and ground.  this coupling affects each leg's impedance.

The relationship of Z1 to Z2 determines whether the antenna is balanced or not.. 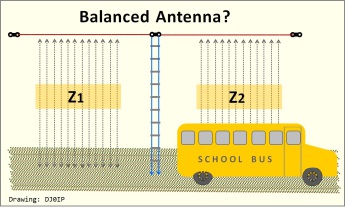 Is this antenna still balanced to ground?

In reality, shit is happening all the time with every antenna installed here on mother earth!

Guess what that does to the current?

I once had an 80m dipole fed through a 1:1 Current BALUN, with one of its legs high and in the clear, but the other leg (same height above ground) running over and close to the roof of my house.  Although I had used this same antenna at a dozen other locations and always had a low SWR with it, at this QTH I could not get the SWR under 2:1.   Eventually I guessed what was happening.  I began shortening the length of the leg running over the house and the SWR began to drop.  I tuned its length for minimum SWR.

So balance does not depend on the physical shape of the antenna alone.  Many other factors may influence its electrical balance, causing a minor or even a significant imbalance in the impedances to ground, thus causing an imbalance of current to flow.

Furthermore, with multi-band antennas, the balance (or imbalance) can differ vastly from one band to another, so the trick of shortening one side of the antenna often does not help.

This  unwanted  flow  of  RF  current  on  the  outer  surface  of  the  coax,  or  in the case of  Open-Wire feedline, difference in the level of RF current flow on the two wires of the feedline, is what we call

We have two weapons in our arsenal for fighting CMC:

THIS CHAPTER OF MY WEB IS ABOUT RF-CHOKES.

IMPORTANT:  The RF chokes shown on the next page are very simple chokes that anyone can build and in many cases, will solve most 'soft' CMC problems.