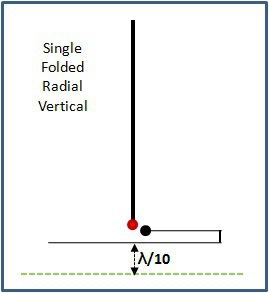 Here is an antenna for people who have only a postage stamp sized back yard, yet would like to work DX on the low bands.  The vertical in the example I show here was built and used successfully on 40m, but it may be scaled to 80m or even 160m.

NOTE: The radiator and the total length of the single radial are both slightly longer than one quarter wavelength.  See download for details.  Although the elevated radial should be about 13 ft. high (for 40m), mine was only 10 ft. off the ground.  Minor length adjustments were needed on the radiator and radial to achieve best SWR at the resonant point I wanted.

Fundamentally this is a 2-dimensional vertical with just 1-Elevated Radial.  The Radial runs in one direction for about 1/10 of a wavelength, then is bent 180 degrees, folding back on itself and running approximately 1/5 wavelength in the other direction.  The radial wire is spaced equal distance below itself (similar to openwire feedline), and extends about 1/10 wavelength beyond the vertical radiator in the opposite direction of the folded portion.  A couple of broom sticks nailed to the fence will support the ends of the radial.

As a result of being just two dimensions, this antenna can be installed on a property line, as long as there is no metal fence running along the line below it.  In fact a 6 ft. tall wooden fence typically found in American backyards is perfect for errecting this antenna above.

Believe it or not, this antenna radiates almost perfectly omni-directional.

I first saw a description printed in RSGB's Radcom about 1990 or so.  I found it hard to believe it would work, so I did as I always do:  I built it and tried it.

I took down my regular vertical and installed this "1-Arm Bandit" in its place.  I than tested it for about 2 years, comparing it to my 40m horizontal dipole.

This is not a very scientific test because I did not compare this antenna directly to my normal vertical.  I compared them both to the 40m dipole.  The results were highly subjective.

In my opinion, this antenna works very well, but not quite as well as the vertical dipole it replaced. However when working long-haul DX, it was consistently 1 to 2 S-Units better than my 40m dipole installed at 40 ft.

If you are interested in working low band DX and back yard space is scarce, this is antenna well worth consideration.  Altough its single radial is extended in a single plane, the antenna is still basically omni-directional.

A descriptive drawing with exact measurements is included in the download below, along with EZNEC modeled results for this antenna.