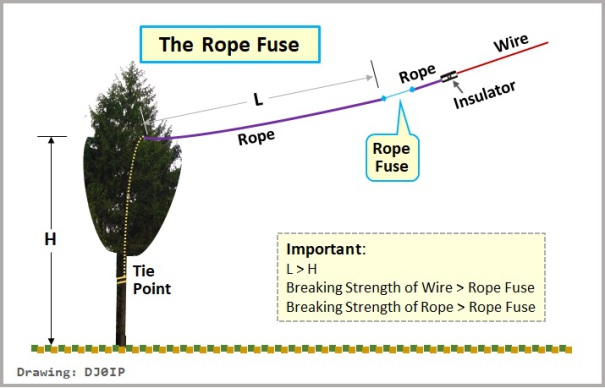 They say that  necessity  is the mother of invention, but that’s not always true.

In this case,  laziness  was the mother of invention.

I lived on a couple of acres of land on the outskirts of town.

It had no HOA’s, but a large number of Scrub-Oak Trees all over the property.

A scrub oak tree is a very ugly tree, and about as useful as ice cubes in Alaska in the winter time.

It thrives in dry climate, typical of south-western USA, but it tends to be a bit brittle and its branches love to break in storms, especially winter ice storms where there is a thick layer of ice on the branches.

As it turned out, Murphy was a pretty good aim and usually managed to send one of these broken-off branches flying directly into the guy lines of my antennas, breaking something . . . usually the rope.

Furthermore, Murphy is a mischievous lad who somehow always managed to assure the rope broke at a point just out of my reach, requiring me to take the rope down from the tree and launch a new rope into the tree with my Easy-Hang.

When he hit one of the Kevlar guy lines of my fiberglass-pole-mounted Vertical Dipole and broke one of its fiberglass tubes, sending the top of the antenna tumbling to the ground, that was the last string, I mean straw.  (whatever)

Since Murphy has been around almost forever and was familiar with most of ham radio’s tricks of the trade, something new was required.  Something that Murphy was not yet familiar with.

Fundamentally, the Rope Fuse is simply a short length (about 1 ft. / 25cm long) of thin rope, inserted at a strategic point in the guy rope.  It’s purpose is similar to that of the perforated lines in toilet paper;  to define the specific point at which the rope will break, should Murphy ever return.

·       Care must be taken that the distance from the Rope Fuse to the tree is longer than the height of the point where the guy rope meets the tree.

At least “that” was my theory.

“Theories” are like antenna models.  They look good on-paper/on-screen), but . . .

Murphy returned to my QTH, the rope broke as planned, right at the Rope Fuse, but the wind blew the stub of rope into the next tree, just slightly out of reach.

PLAN-B:  The addition of a small lead weight to the junction of the rope and the Rope Fuse.  I tied a small fishing weight – just a couple of ounces – to the antenna-end of the rope stub in hopes that this would drop it straight to the ground the next time Murphy took out my Rope Fuse.

After determining which direction was northeast, I looked in the direction of Ireland and shouted . . . I suppose I should repeat here what I yelled at Murphy!

The coward never came back!

So with fingers crossed, I have continued to use a Rope Fuse in all of my permanent antenna installations till this day.

IMPORTANT NOTE:  if you are planning on installing a tower and beam/rotor, do NOT use a Rope Fuse!  Please do your own due dillignece for that project!

The moral of this story:

If the Rope Fuse breaks, you must re-fuse.

Don’t be a dope and just use rope,

or you’ll skin your knees

while climbing the trees!