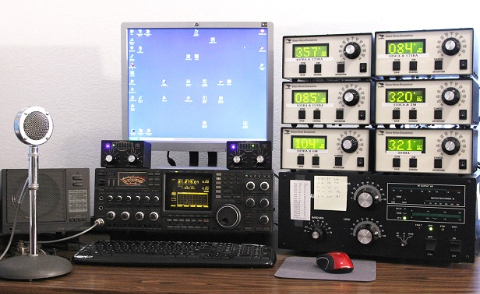 Rob has several operating positions but "this one" not only shows his favorite position, it also depicts some of the messages he tries to share with the thousands of people who follow his research.

With all those multi-thoushand dollar transceivers to choose from, in most of his presentations, Rob still raves about the ergonmics of the IC-781 and the fun he has using this transceiver.  This picture also shows that your ham radio dollars, first and foremost should be invested in the antenna system, not in the radio.  (See his antenna farm, here:  SHERWOOD FOREST

It also tells me that Rob must be in my age group because like me, he uses a microphone out of the 1950s, a loud speaker with filters in order to hear better, and a cheat sheet to enhance the short-term memory when tuning the linear! (hi)

You will find more pictures in the NC0B Photo Gallery.  (still under construction)

"SHERWOOD SOUND BYTES"  is a collection of related and non-related data burst Rob has shared with us in several of the online forums he participates in.

SSB-01 Transceiver Performance
In this SSB, Rob explains that there are many other features and characteristics of a transceiver than just its DR3 ranking.
SSB-01 TRANSCEIVER PERFORMANCE.pdf
PDF-Dokument [76.5 KB]

This comment was made to the Ten-Tec Eagle group, thus the frequent mention of Ten-Tec.

SSB-02 Do not over-rate Dynamic Range (DR3)
In this SSB rob stresses once again that DR3 is not the only aspect of a transceiver that we should consider in our choice of radios.
DO NOT OVER OVER-RATE DYNAMIC RANGE.pdf
PDF-Dokument [33.5 KB]

SSB-03a Comments on Inconsistent SPECS (of Receiver Characteristics)
THIS DOCUMENT DEFINES "HOW MUCH PERFORMANCE IS REQUIRED". These comments were made to the Ten-Tec Eagle group on 15-JUL-2014, extracted by DJ0IP and reprinted here with Rob Sherwood's permission.
COMMENT ON INCONSISTENT SPECS.pdf
PDF-Dokument [113.7 KB]

Sherwood Comments on ARRL Testing using a 3 Hz Noise Filter
In this document Rob Sherwood speaks about noise and testing methods. This was in an email to the Ten-Tec Eagle group on the testing method changes by the ARRL. The title of the email was Re: [Ten Tec Eagle] Re: The Numbers Are In...
Rob Sherwood on ARRL TESTING WITH 3 Hz N[...]
PDF-Dokument [32.2 KB]

S-Meter Accuracy
These comments were taken from Rob's email dated 6-OCT-2016 with the Subject: "Re: [TS-990S] Re: TS-990 adjusting using jig. In this document, Rob shares with us his judgement of the S-Meter accuracy of various recent radios.
SSB-06 S-Meter Accuracy.pdf
PDF-Dokument [62.9 KB]

In this sound byte, Rob explains how to set up a modern receiver for best reception under noisy band conditions.

In this sound byte, Rob explains how to set up a modern receiver for best reception when working Digi-Modes under noisy band conditions.

Just because some hams are not aware of direct sampling receiver overload doesn’t mean it never happens.  Any radio can be overloaded in a worst-case RF environment.

If you doubt the power level coupled between two Yagis 200 feet apart, please read the following PDF (at nc0b.com/dxe) or directly below in SSB-10.  When running legal limit the power into the other radio would be over 35 watts!   This is what multi-multi stations have to deal with.

A K3S blocks with a signal 22 dB higher than a K4/K4D reaches ADC over-range.

Most of us will likely never need that level of performance.  I certainly don’t with my QTH 12.7 miles away from my closest neighboring ham.  [Note: the K4 radio compared here does not have the optional hybrid front-end.] 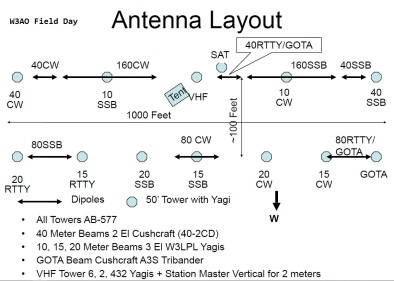 If a well-equipped Field Day setup had appropriate bandpass filters, and only operated with one station per band, then the chance of overload of any radio would be minimal.

W3AO knows how to setup antennas for high isolation, and they are all end to end to start with.

[Note: in this SSB, Rob show an example of how bad a receiver can be overloaded at a multi-TX site and shows one way of protecting the receiver.]

In this sound bite, Rob explains how TX IMD is sometimes stated in two different methods.  When comparing IMD between two transmiters or amplifiers, be sure that both numbers are stated sing the same method.

In this sound bite, Rob compares the blocking levels of traditional Superhetrodyne radios with that of Direct Sampling SDR radios, as well as Hybrid-Superhet radios.

Solid State linear amplifiers are gaining in popularity due to their simplicity of use (i.e., no tune). Unfortunately, their Intermodulation Distortion (IMD) products are significantly worse than those of tube amplifiers.