THE GOOD, THE BAD, AND THE LOVELY

I received my 7610 a few hours before the 2017 ARRL 10m contest, much of which was spent on CW receiving weak signals.  The next contest I ran with the 7610 was the Stew Perry W1BB Top Band CW contest on December 30th.

I have three operating positions, so I can switch rigs by changing chairs.

I have the IC-7610 setup at Ops1 on the left, with just one computer.  The Alpha 99 uses vacuum relay T/R switching. In the long run the 7610 will move to the Alpha 89 (Ops2).  I only have redundant computers setup for the 7000DLE at Ops2, the main rig being evaluated this weekend.  Setup Time: 5 Minutes

I have the ANAN 7000DLE setup in the middle, with redundant computers.   This is the main rig being evaluated this weekend.  The Alpha 89 uses PIN-Diode T/R switching. The left two monitors are on the main PC.  A backup PC has the two monitors on the right.  Just don’t have room for four 19-inch monitors, and unless the smaller monitor looking at PowerSDR is a problem, I’ll leave it this way.  All I have to see is the panadapter / waterfall, select the filter bandwidth, etc., but after some operating I can adjust if necessary.  I can swap with the monitor at Ops3 if necessary.  It has a modest contrast problem, but it works and is obviously larger than the 15-inch monitor.  Setup Time:  Days (with lots of fiddling).

Ops3 is on the right and has the 7300, 630m transverter, Acom 1000, and single computer.  The Acom 1000 also uses vacuum relays for T/R switching.  I’ll let that PC duplicate the network N1MM+ log, but I have no plans to run the IC-7300 [in the contest] since I have used it so many times in the past year and a half.  I will likely go back and forth between the 7610 and the 7000DLE part of the time.   Logging is to a common database, and that is how I always compare 2 or even 3 radios in a given contest.   It also provides redundancy should the smoke leak out of a rig!  Hi Hi

The 160m antenna uses a Marconi-T configuration, with 150-foot flattop strung between two towers that are 260 feet apart. The 60-foot vertical down lead is connected at the center of the top-loading wire.  It is matched at the base with a remotely-tuned L/C network.  The ground system initially consisted of 650 square feet of ground screen, laid out in an X, as shown.  Later in 2009 Rob added forty 100-foot radials, and presented extensive data on his antenna system during that year’s Dayton Hamvention Antenna Forum. 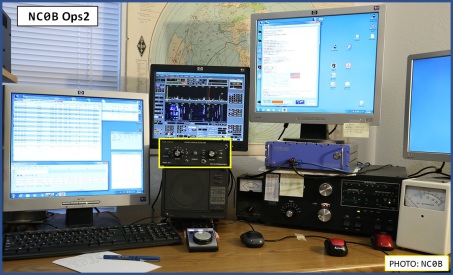 I don’t know why I put the audio amp in the wrong place, so after about an hour I moved it on top of the speaker in front of the 15-inch monitor.

See new Ops2 picture on the right >  Over on the right was a bone-head place to put it.  The audio amp for the 7000 is an old SE-3 Mk II that has been modified to just be an audio amplifier.  LM383T running on 18 volts.  Headphones are plugged into the SP-20. 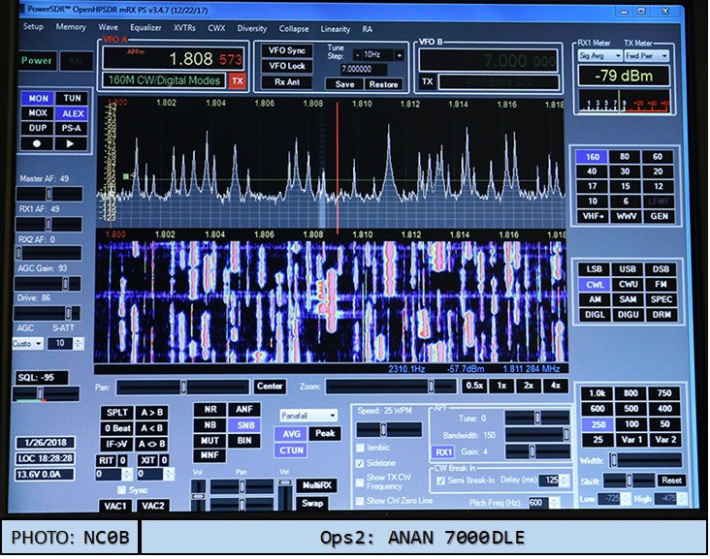 Comments on choosing reception aids:  Scott, WU2O was encouraging me to use NR2, but I prefer the spectral noise blanker (if needed) and the APF set to 150 Hz with the normal filtering set to 250Hz. For some reason I have some modest line noise during daylight hours, so that was why the spectral NB was ON.  I’ll likely turn it off after my break.

The band was open at 3 PM local time, and I got on about 10 minutes late.  Have 25 states / provinces so far after 2 hours.  The 15-inch monitor is no problem.  I have the spectrum scope set for about 16 kHz width.  The attenuator is set at 10 dB, which is what I use by default on most radios on 160m.  In general I have not found the waterfall useful, unlike on 630m.  The only place I used it was up above 1860 where there were obvious carriers that were not being keyed, so I didn’t try to tune them in.

As usual it took 2 hours to go from 1800 to 1870 kHz as an S&P operator.   Very early on, as is normal, some stations in the Midwest that I can copy here in daylight didn’t hear me.  There of course there were some much further east who could copy me just fine.   RX noise level differences I assume.

COMPARING THE ANAN TO THE ICOM:

The Apache can see a little further down into band noise of signals that are too weak to copy, while pretty much any signal I could see with the Icom I could work, usually on the first call.  On one afternoon about 3:15 PM, there was one station that was -88 dBm with a band noise in 250 Hz of -103 dBm.  He was arm chair copy but couldn’t hear me.  Of course it was daylight here and he was in Illinois or Indiana where it was dark.  I never heard him again later.

Here is how I have it setup, which isn’t all that different from the 7000DLE:

Both are set for semi-break-in so at 26 WPM the rig doesn’t recover in-between characters of NC0B.  They both drop out between 5NN and CO which is the report. I don’t know why everyone is 599!  Hi Hi

The 7000DLE has very noisy T/R switching, while the 7610 is completely silent.

The Alpha 89 with PIN diode T/R switching is also completely silent, while the Acom 1000 vacuum relay is quieter than the Alpha 99 vacuum relay.

If I wasn’t evaluating rigs, I would always choose to pair the 7610  with the Alpha 89 for CW QSK.

The only issue that is really annoying with the 7000DLE is the T/R acoustic noise.

Thoughts on the Setup:

Of course the better QSK match would be to swap the rigs; have the silent Icom on the silent Alpha 89 and the noisy Apache on the noisy Alpha 99!  The reason I didn’t do that was I only have a backup PC at the Alpha 89 operating position.  Scott, WU2O, setup all the complicated software on the backup PC too, so I could deal with Murphy in case something crashed on the main computer!  Hi Hi

By the way, FocusMaster works like a charm with N1MM+ and the 7000DLE.

No glitches on either setup.

Other than the noisy relays, I am happy with the 7000.  160m tends to run at 26 WPM plus or minus a few.  Some go like a bat out of hell, and I ignore them.  I have the delay set so it doesn’t drop out between letters of my call.   When I slow down to 22 WPM for a few guys, it drops out on every letter, and the stations can still copy, so I guess it isn’t clipping the leading edge too much.  I’ll measure stuff like that next weekend. That delay settings is at 125ms. Unlike the 7610 (or K3 for that matter), the 7000DLE is not a good QSK rig.

The 7000DLE and the 7610 both performed admirably.  From a simple performance standpoint, copying weak signals in heavy QRM, and using their respective NR or NB, it was a wash*.  Of course the radios are vastly different from a user interface standpoint.  It took a friend a few hours over two days using TeamViewer to install virtual comm port software, set the defaults to something useful, and make the Apache talk to N1MM+, my normal contest logging program.  On the other hand, it took me 5 minutes to get the IC-7610 contest ready.

*For non-native English speakers: "it was a wash"  means "both were about the same."

The relay noise from the Apache is too loud, much louder than my Acom 1000, and about twice as loud as my Alpha 99.   That is crazy for a $3000 rig today, and significantly louder than the IC-7300 relays.

However, the 7300 currently costs just $1149 (after Icom rebate).  It's hard to fault a radio for having some relay noise when it costs just 1/3 as much as the radio without the relay noise.

So far my 7610 has not had the supposed software glitch some others are experiencing.

What is Yaesu or Kenwood going to do to respond?

Does Elecraft come with a completely different K4?

Interesting times for sure!

NOTE:  If you haven't watched it yet, you might also be interesting in watching Rob's interview on Ham Talk Live:  http://www.nc0b.com/hamtalklive

Note: his actual talk begins about 7 minutes into the broadcast.