on typical antennas, under various configurations. 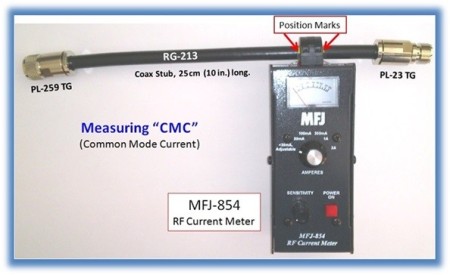 A TEST TO MEASURE

After retiring and moving back to Germany in 2011, I finaly found time to "play" with antennas. Unfortunately, due to the limitations of my yard I am not able to install a tower and beam.  Permission was granted for a single antenna near the house.  Thus my interest in OCFD antennas (one antenna, many bands).

During this process I was confronted with some really strange situations where measured results did not concur with modeled or exptected results.

It was determined that COMMON MODE CURRENT (CMC) was the reason...

(A subject I knew very little about).

After reading everything I could find on the internet, I reached the conclusion that more specifics were needed if I were to continue my tests with the antennas mentioned above.  I wanted to try and quantify CMC for typical antennas in specific installations.

Roy W. Lewallen (W7EL), and author of EZNEC, did CMC experiements of his own and ran tests on several balun types, using a 10m dipole for the tests.  His document, "Baluns: What They Do And How They Do It"* was published in the ARRL's Antenna Compendium Volume 1.  It was very educational, but Roy concluded with:

"More work needs to be done in evaluating the various styles of current baluns (such as coaxial cable wound into a choke, coaxial cable wound on a ferrite or powdered iron core, insertion of the feed line through one or more ferrite cores, and so on)."

Coincidently, this was the exact same conclusion I came to as a result of building and testing 12 different Windom antennas.  The problem was, I still did not have enough fundamental knowledge to run the test on my own.

BUT I HAVE FRIENDS.  Many of them are engineers.  I inlisted the help of a team of 4 experienced engineers to teach and support me throughtout my tests.  The team currently consists of DJ1AT, G3UNA, & G3TXQ - plus another who wishes to remain annonimous.

More info in the Menu on the left (top), or click the link below to continue .