I AM NOT POLITICALLY CORRECT.

I MAKE ZERO EFFORT TO BE.

POLITICAL CORRECTNESS IS COWARDLY AND WRONG!

IF YOU PRACTICE POLITICAL CORRECTNESS

YOU'RE PART OF THE PROBLEM!

“…I shall speak forth my sentiments freely and without reserve.… It is only in this way that we can hope to arrive at truth, and fulfill the great responsibility which we hold to God and our country. Should I keep back my opinions at such a time, through fear of giving offense, I should consider myself as guilty of treason towards my country, and of an act of disloyalty toward the Majesty of Heaven, which I revere above all earthly kings.”  - Patrick Henry, March 23, 1775

If you are offended by certain words you may find here, even though I have used them in their primary meaning as defined in the Webster or Oxford dictionary, then perhaps you should just GO SOMEWHERE ELSE.

People are always asking me if I am German or American.

I was born in Oklahoma City USA, in the first half of the previous century.

Thus the term "Old Man" is a good fit.

*While living in the US, in 2008 I founded Spiderbeam-US, the North American

When I returned to Germany in 2011, I took over responsibility for running the German Spiderbeam Shop, as well as doing Tech Support.

I retired from the sales/marketing responsibility in January of 2018, but still do the high-end Tech Support for Spiderbeam.

I also designed the Aerial-51 product line of Antennas which Spiderbeam and its global resellers sell.

I am the President of the Main-Spessart chapter of the Deutscher Amateur Radio Club.

Now that I'm retired, I want to devote more time to my favorite aspect of our hobby, portable (field) operations, especially using QRP.

I guess I'm a Bavarian Cowboy: 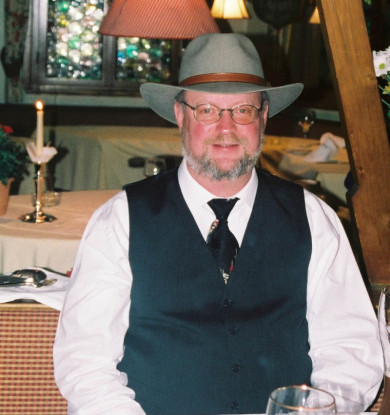 BTW, my very first job was working 12 to 14 hours per day as a cowboy

in the Oklahoma City Stock Yards.   That was 1966. That job, much more

so than my parents insistance, made me go to college and earn a degree!