THE COST OF TRANSCEIVER PERFORMANCE

IMPORTANT:  This section is an evaluation of Rob's Performance Data vs. current US Street Prices, conducted by me (Rick, DJ0IP).   I am responsible for any errors on this page, not Rob.

Rob Sherwood's Transceiver Performance Chart is one of the most popular ham radio web pages on the Internet.  If you haven't seen it yet, here is the LINK:

And to be more specific, it list the radios in order of their 3rd-Order-Dynamic-Range (DR3).  DR3 has long been considered the single most important measurements of a receiver's performance.  Since 2013 the ARRL has popularized Reciprical Mixing Dynamic Range (RMDR) as another important measurements.

If we compare by RMDR instead of DR3, the ranking changes but only slightly.  With DR3 and RMDR being 100+ dB on these new radios, using these values a the primary decision criterion is achedemical.  At this point it's time to use other criteria for your personal choice of radio.

With the introduction of SDR technology in our transceivers, other factors also contribute largely to the receiver's performance.  As a result, a transceiver with a very high DR3 may perform well in some circumstances, yet its performance drops off significantly under other circumstances.

As a result, comparing performance between radios of different technologies, using only their DR3 measurement as an evaluation criterion may lead to an eroneous conclusion!

Unfotunately there is no easy evaluation method.  Other parameters and characteristics must be considered and some are best evaluated with ON-THE-AIR tests, especially during contests.

According to Rob, THE most important criteria for choosing a radio is,

you have to enjoy using the radio!

For this reason, we should not just study Robs Performance List, we should also read his entire TEST REVIEW for each transceiver.  These reviews include subjective appraisals and feedback on how the radio performed during contest operations.  Rob has done this for most of the radios he has tested, but this part of the test requires waiting until the next big contest comes along.

ALL OF THE ABOVE WAS ONLY ABOUT 'PERFORMANCE'.

NOW LET'S LOOK AT PRICES AND 'COST OF PERFORMANCE'!

with prices and comments on technology added by DJ0IP.

EOL = End Of Life (no longer available as new)

Now let's take a look at it from another viewpoint:

(Sorted by "Cost/dB" of DR3 Performance) 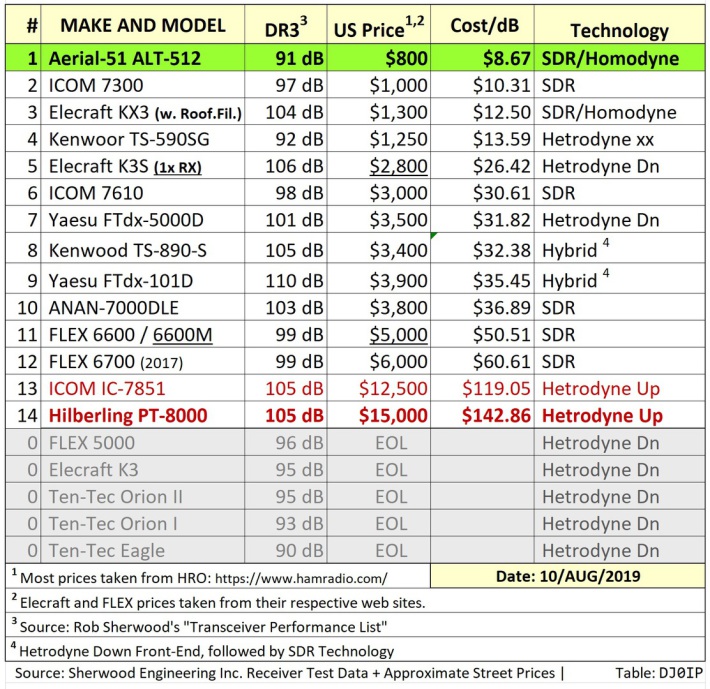 In the two tables above, we have seen the absolute cost of DR3 performance, in terms of $/dB.  Another way of looking at the cost of performance is to select a Radio that is good enough for most operators, define its performance level as 1, and examine the cost per additional (incremental) dB.  We shall use the IC-7300 for this purpose.

TABLE #3:  THE INCREMENTAL COST OF PERFORMANCE:

Sorted by "Cost/Incremental dB" of Performance. 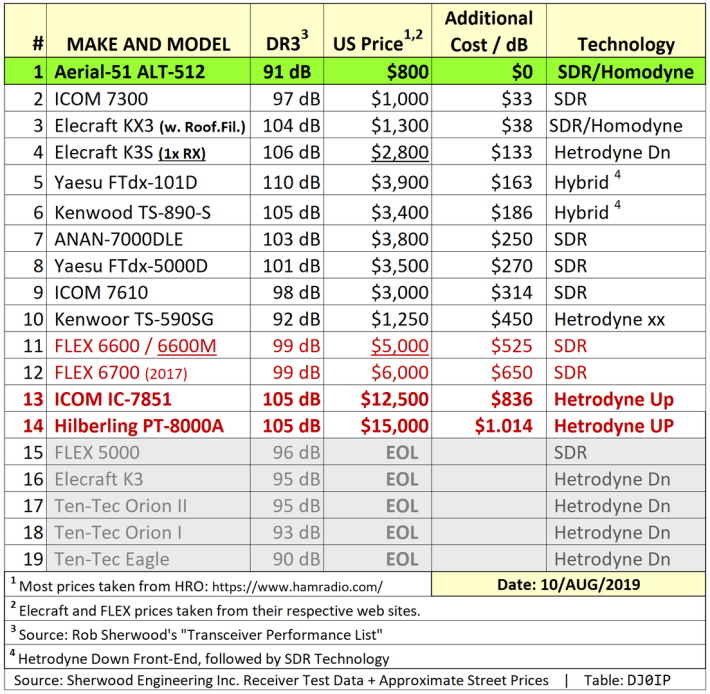 As seen in Table #1, the current DR3 performance leader uses Hybrid Technology.  Not seen on this page (yet) are the RMDR measurements.  When ranked by RMDR, the leader is then the Kenwood TS-890S (127 dB), followed closely by the Yaesu FTdx-101D (123 dB).  These radios both deply Hetrodyne (Down) front ends ahead of their SDR technology.  The newly announced Elecraft K4 also offers an optional Hetrodyne Front-End for users who need the extra DR3/RMDR performance.  The deployment of a hetrodyne front-end enables the use of a narrow roofing filter, which improves both DR3 and RMDR significantly, compared to standard SDR technology.

The two radios using Upward Hetrodyning Technology both have excellent performance but beware of the cost!  Each dB of additional performance, over the performance of the IC-7300, will cost you way over $1000!

Most of the older radios on this list are using Downward Hetrodyning Technology.  Except for the Elecraft K3S, all of the radios using this technology top out at about 95 dB.  Although this places them near the bottom of the list, this is still an outstanding performance level and will suffice for all but the hardest applications.  Remember, this Short List of 18 transceivers is a list of WINNERS, taken from Rob's longer list of about 150 transceivers and receivers.

Standard SDR Technology has a very broad front-end!  As Rob states in his latest presentation (Receiver Performance: What is the Limit Today?), front-end bandwidth is typically several MHz wide, and in some radios it's the entire HF spectrum!  Never-the-less, more than good enough performance is obtainable with this technology for most hams in most applications.  Multi/Multi contest stations, and Field Day sites with multiple transmiters are examples of cases where the SDR technology (alone) may be inadequate, unless you use external (expensive) Bandpass Filters (BPF).

(Note: The information shown here under DISCUSSION is my understanding of these technologies and my opinion.  It was written by me (Rick, DJ0IP), not Rob.)