A SIMPLE, LOW COST HOME-BREW TUNER BALUN FOR UP TO 500 WATTS

From the previous page on TUNER BALUNS, we saw why a 4:1 balun of any type is the WRONG balun to use as a Tuner Balun.  Indeed the 1:1 Guanella (Choke Balun) is the only correct way to address the task of transitioning from Openwire Feedline to an Unsymmetrical Antenna Matchbox.

BEWARE: MOST PEOPLE WORKING IN THE SHOPS WHO SELL BALUNS DO NOT UNDERSTAND WHY AND ARE STILL LIVING IN THE FALSE WORLD OF YESTERDAY WHERE PEOPLE BELIEVED THE 4:1 BALUN WAS THE BALUN OF CHOICE.

Besides, they will offer you a balun costing $80 to $150 and claim "this is what most people use."  In one respect they are right.  Most people are using the wrong balun, due to the bum advice they are receiving from the people who claim to be experts.

Do your self and your bank account a favor:  home-brew your own balun!

Now on with the project:

In this example, the terminals used are       Terminals

It consists of a specific number of turns         on a Specific

The special winding Cross-Wound, or

Cross-Winding technique is called the

W1JR, who first described this technque

of winding.    (see bottom of this page)

In this picture the balun has a female UHF

(PL) connector because that's what this

particular application called for.   If you        Insulation is a

you would remove the heat-shrink tubing,       combination

and a double-female PL enables you to      liquid electrical

It is perfectly OK to use this outdoors but then you should insulate the connection terminals with electrical tape or similar after connecting to the 450 openwire (windowline).

Purists may also want to coat the pre-wound toroid with several coats of liquid electrical tape, but that is not absolutely necessary.

Contrary to what most commercial balun vendors try to make us believe, there is no such thing as a "best" balun or "one-size-fits-all" balun.

With this many variables, how can there possibly be just ONE balun type that is best?

If that were true, there wouldn't be so many variables to work with and there would have been no need for Jerry Sevick to write his book on Baluns and Ununs.

Yet most salesmen trying to sell you a balun will try to make you believe there is a "best" that most people use.  NONSENSE!

The selection of components for your tuner balun will depend on the required bands it must cover as well as the power level it must handle.

In our real world, this is not a practical solution, so we seek the best compromise. 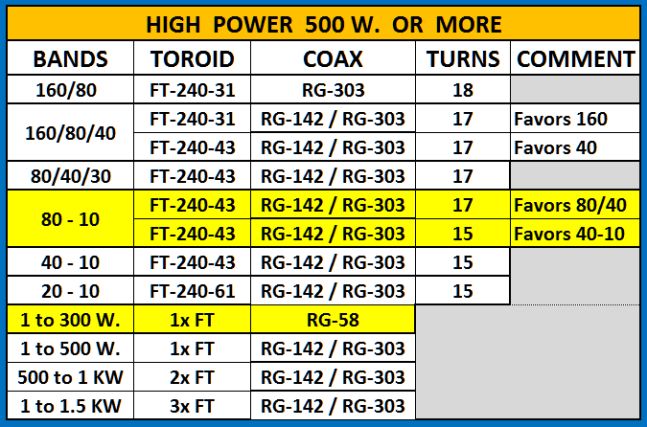 NOTE:  The combinations marked with a yellow background are typical               for what most people will use for their 80-10m tuner balun.

The tables above assume your want your matchbox to be usable with "any kind" of openwire-fed antenna.

It seems to me that most people designing baluns make the assumption that most users will only use the matchbox with symmetrical antennas.  They seem to forget that some users want to match openwire-fed OCFD antennas or vertical-dipoles with it.

These two antennas just mentioned can tend to have a lot of common mode current on them.  The table above takes that into consideration and suggests toroids with enough permeability for the job.

If you are only matching a center-fed dipole or a full-wave loop and these are hung high and in the clear of surrounding objects, then you may wish to use toroid cores with less permeability - thus slightly less loss.

In that case, in the tables above, substitute as follows: 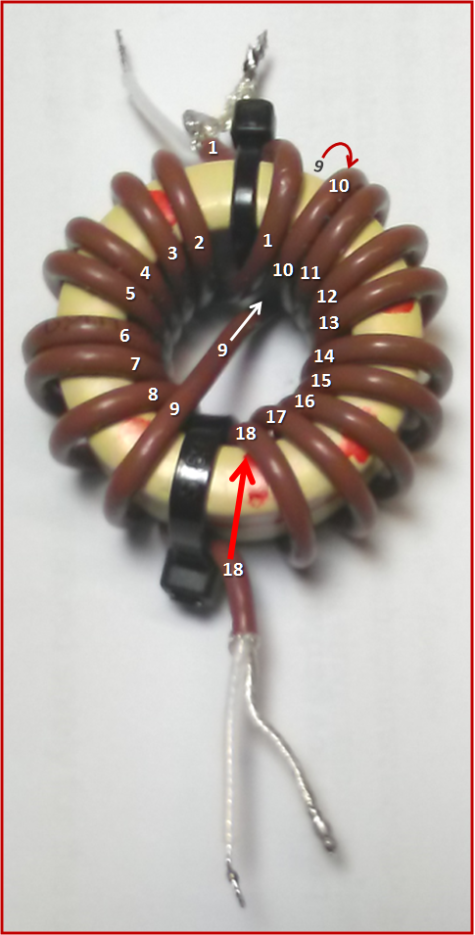 With classical winding, both ends of coax end up sitting next to each other on the same side of the toroid.  Often this is OK.  Sometimes it is advantageous to have them at opposite sides of the toroid (i.e. one on top, the other on the bottom). 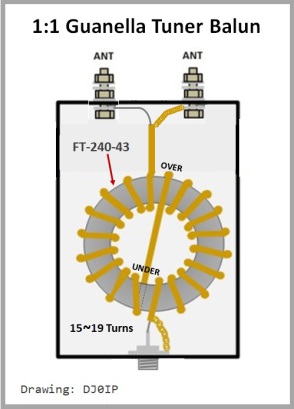 The drawing on the right shows a simple, but effective Tuner Balun that can be used between an unbalanced Antenna Tuner and Balanced Transmission Line.

If wound with RG-58, it is good for a couple hundred Watts.  Use RG-142 coax (Teflon insulated) for higher power.

If you prefer, you may use Bifilar windings instead of coax, but I strongly recommend using Teflon-insulated wire.  In theory this is slightly better, but in practice you won't notice a difference.