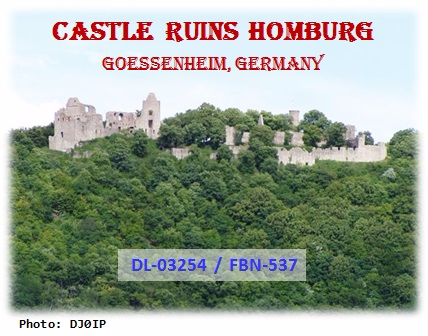 Rick, DJ0IP  activated the Castle Ruins Homburg in the 2016 anual Castles On The Air event on May Day.  It was a 1-day activation with focus on 40, 20, and 17m, and was the first time that this Castle had ever been activated.

QSL:  To DM5P via the Buro, or the QRZ.com address of DM5P

Built on a mountain top 300m NN, the "Castle Ruins Homburg" is Germany's 2nd largest castle ruins.  It was constructed near Goessenheim in Lower Frankonia between 1028 and 1031 by Reinhart von Hohenberg from Adelsberg (near Gemuenden).  It was expanded in 1235 and again in 1470.

In 1492 as Christopher Columbus discovered America while searching for India, Burg Homburg became an official "Amtssitz" which is like a local regional government HQ - or Town Hall.  It had an "Amtman" (like a mayor) responsible for regional civil affairs.

The castle survived several wars including the Bauernkrieg (Farmers War) in 1525, but in 1680 its Manor House was destroyed by a fire and the facility shut down.

Its final destruction was after the 2nd World War when local residents from Goessenheim plundered the buildings for stones for rebuilding their own homes, destroyed during the war.

TODAY the castle ruins are a local tourist attraction and favored location for events.

Next time I do an excursion like this, I will make better pictures (close-ups) of the base mount for the fiberglass pole.

THIS EXPEDITION WAS A FLOP...(more or less).

Good news:  the weather was great, sunny and about 20 degrees C.

Bad news:  the weather was great . . . and about 100 people were out walking around the castle in small groups of 2 to 5 people.  Nearly every group of people stopped to ask me what I was doing.

Of course I paused to answer the people and explain what I was doing and assure them, "yes I do have a mobile phone, and yes it is still fun to talk to people on the radio instead of with a phone."

LESSON LEARNED:  Next time I go on another COTA expedition, I will take a second operator to explain what I am doing.  That will give me more time to operate on-the-air.