fed with a Symmetrical and Balanced Feedline

Seems many people prefer arguing over the names

rather than trying to understand what these antennas are

and how to build and use them effectively. 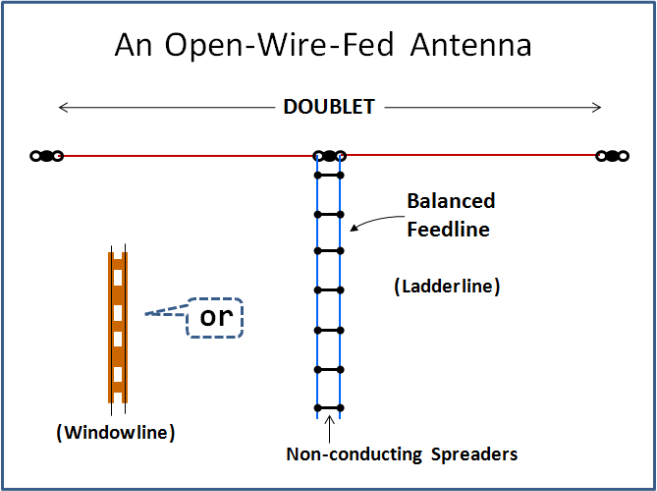 Hey, don't start that again!  Call it what you like.

I'll tell you what it can do for you and how to build it.

BEFORE WE START:  SEMANTICS

Unless otherwise specifically stated, I will use the generic term "Openwire" to mean any and every balanced feedline mentioned above.

There are some instances where there are differences.

In these cases I will explain, using the following 3 terms:

​These three different feedline types are explained in detail on the page OpenWire Info.

You will also find information about building your own ladder line here: D-i-Y Ladder-Line.

What this antenna is:

Usually it is a simply a Dipole, fed in the middle with openwire feedline.

Initially these antennas were one half wavelength long on the lowest operating frequency.

Later, shorter versions were found to work successfully, with a few concessions that we will discuss below.

"Dublet" was the common name for this antenna when it was not a half wavelength long on the lowest operating frequency.

Originally these antennas were called "half wavelength Hertz Aerials" and were fed with a single wire. Later they were fed with two wires (which I generically call openwire) and called a Double-Zepp Aerial (or Antenna) because they could be viewed as being two single-wire Zeppelin antennas, fed with a common balanced feedline.

These antennas REQUIRE the use of an Antenna Matchbox on all bands.

They not only require an antenna matchbox, they also place some fairly significant requirements on the match box (e.g., very broad impedance matching range, from single digit Ohms up to multiple thousand Ohms, must be capable of coping with very high voltage as well as very high RF current).

Most people believe that the antenna should be a resonant half wavelength.  This length has the advantage that when resonant, it is (theoretically) purely resistive.  However it also has disadvantages, specifically the impedance on the harmonic bands is VERY high; several thousand Ohms.  This can be quite difficult to match.

Common sizes for the 80m Doublet:

The longest one, the full half wavelength was used primarily at home.

When traveling I tended to use the 111 ft. when I had space, otherwise the 88 ft.

At one home QTH where space was limited, I had to use the 66 ft. version, even for 80m.

Fundamentally and HIGHLY SUBJECTIVE, I can say the following about performance:

On its fundamental frequency, the dipole antenna should have an impedance near 73 Ohms.  However since the feedline is typically not 73 Ohms; specifically on the order of 300 to 600 Ohms, it will transform the feedpoint impedance to some other value. Depending on the length of the feedline, it may be either very low or very high.

Indeed, with this antenna, the impedance in the shack may be all over the map!  High; Low; Anything.

On the second harmonic, the feedpoint impedance is roughly 4000 Ohms, well beyond the matching range of all automatic antenna tuners and even beyond the range of most manual matchboxes.  Of course the feedline will transform this, but to what?

Again it depends on the length of the feedline.

Most people believe that this problem is solved by inserting a 4:1 balun.  WRONG.

If you do that, and are you running higher power, that's when the real trouble begins.

There are numerous suggestions on how to overcome this, including changing the length of the dipole to various non-resonant lengths, using specific lengths of feedline, etc.

This is addressed on the pages, Recommended Lengths and Charts of Lengths.

The best place to start is by using an antenna matchbox that can stand up to the rigorous requirements this antenna places on the it.

I address this problem in the section:  Matching Solutions.

Suffice it to say, there is nothing more foolish than to believe there are no big differences between one matchbox and the next.  There can be huge differences!

And since I am always an advocate of keeping the antenna as light as possible for using with lightweight telescoping fiberglass poles, I also show you how to build an ultra lightweight center insulator, SIMPLE and CHEAP.  HERE