DEFINITION OF A GOOD ANTENNA

The following definition is the best I have come accross:

Antenna performance is entirely a matter of one's expectations.

Antennas must always be assessed along with their circumstances and situations.

The definition above reflects the reality that we can't all install

Telrex Christmas Trees in our back yards like the one shown below: 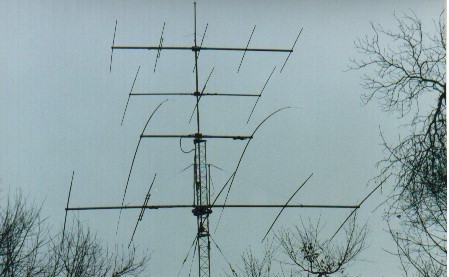 Just what is a "Good Antenna"?

We often hear hams talking about their antenna, saying things like the following:

1)  "Better than a dipole?"  A friend of mine describes it like this:

Practically everything one wants to know about antennas can be tested, measured and quantified, including size, gain, radiation pattern, feed point impedance, and efficiency.  Yet, many hams ignore all these measurements, and speak about their antennas in very general terms, saying their antenna is "really good," or they say they want something "better than a dipole,"

Better in what way?  How much better?  How do you know it is better?

Using unquantifiable and vague words to describe antenna performance, instead of actual measurement values, renders any comparative appraisal vague and subjective.  By using standard measures and values, we can make intelligent and meaningful comparisons.  Saying one antenna has 3 dBd more gain,  or has a lower specified take off angle, or is X % more efficient, says something much more useful than saying it is a "really good" antenna and "better" than a dipole.

The electrical properties of any given antenna are reciprocal. For example, any gain (or lack of it) they exhibit applies equally to transmit and receive. However, in the real world, the performance between transmit and receive is not reciprocal. This is due to a variety of reasons, not the least of which is takeoff angle. Further, improperly installed HF mobile antennas may have their radiation pattern overly distorted, which exacerbates the performance difference. There are many more variables too. I mentioned SNR, and ERP above, and to it we add; atmospheric noise, propagation phenomena, and even ground losses, to name a few.

In fact, the difference between transmit and receive performance can be rather extreme; sometimes you can hear better than you can be heard, and sometimes the reverse is true. So when you make a pat statement like, I can work any station I can hear, you're kidding yourself. However, if the statement is factual, you need a better antenna and/or mounting scheme!﻿﻿