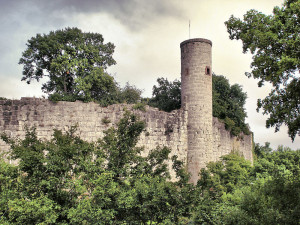 The Castle Ruines Homburg is located near Gössenheim  in the Main-Spessart region of Lower Franken.  It is the largest castle ruines in Germany.

Over the ages the castle withstood several wars without significant damage, but an internal fire in 1680 was the beginning of its downfall.  From then on it deteriorated due to natural causes.

After the World War, the people of Gössenheim began plundering the castle for the stones in its walls, to use as building material to rebuild their own houses.   Eventually the government placed it under protection of historical monuments.

Today it is a popular tourist attraction and once a year, the site of a wine and music festival.

Filmed by the world's WORST movie producer: "me".