According to Sevick, there are two ways to build a 4:1 Guanella Balun

According to W8JI, the Single Core Version has significant imbalances.

According to G3TXQ, the Single Core will only work if the load is 100% floating and totally independent from ground.  Since no hf antenna on the planet has ground independance, this version won't work.

According to the ARRL Handbook, the only picture of the 4:1 Guanella balun is a dual-core version.

DJ0IP's own test results in his 2013 CMC Test, prove the single core fails to accomplish the task of impeding common mode current, whereas the dual-core balun does a good job at the task.

What are the Physical Differences? 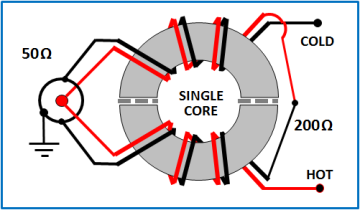 Each of the two 100 Ohm transmission lines are wound on opposite halves of the same toroid, in opposite directions of each other.

The result is a 4:1 transformer which, when used together with an hf antenna, generates common mode current instead of impeding it.

IMPORTANT: If you are using one of these currently in an antenna and not having any problems, then continue to use it and don't worry about it.  But if you are experiencing problems, especially common mode current on the feedline, you should replace this balun with a dual-core version as shown below. 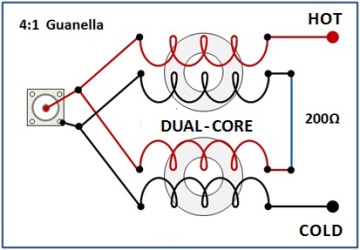 Each of the 100 Ohm transmission lines is wound on its own dedicate toroid.

The result is a true balun that impedes the flow of common mode current.  It also transforms the impedance from 50 to 200 Ohms.

THIS IS THE ONLY TYPE OF 4:1 GUANELLA BALUN TO USE IN AN HF ANTENNA!

If you look closely at the schematic of each, you will see that they are exactly the same.

The only difference is the number of cores used and of course, in antenna applications, one works, the other doesn't!  THERE ARE NO SHORTCUTS!

ALL of the companies manufacturing OCFD antennas commercially are still using the single core 4:1 Guanella, and under certain circumstances can incur severe common mode current problems.

The only exceptions I know of are Spiderbeam and DX-Wire, two German antenna companies.

You will find direct links to the work of G3TXQ, W8JI, and DJ0IP  HERE.