An antenna for those who can have no antenna . . .

THIS ANTENNA WAS DESIGNED FOR INDOOR USE.

In 2005 my Uncle Harold ("Hal") had to go into assisted living. My family stored all of his ham gear (out of his RV) in my mom's garage.

When I visited my mom in March of 2005, I met with Hal and he told me how much he missed his ham radio, especially his friends on the 40m Kadiddlehoppers Net.

The antenna described below got him on the air and he was able to reliably check into his net on a daily basis, even though the antenna was used indoors!

He was a Happy Camper once again ! 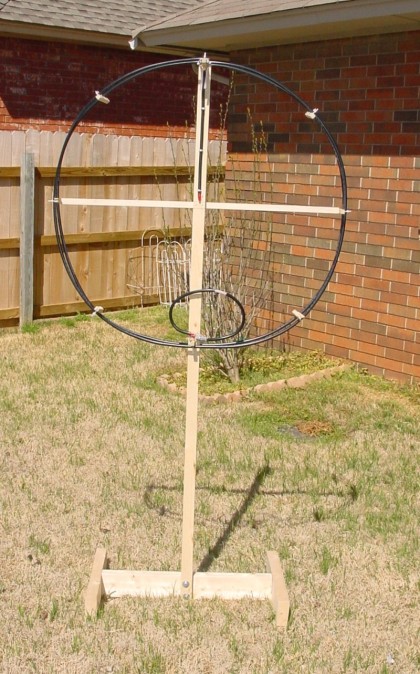 I checked his gear and found he had two hf transceivers which were still in working order; an old Atlas 110x and a Kenwood TS-120.  I chose the TS-120, cleaned it up, cleaned up his Astron linear power supply and his microphone.

Now we needed an antenna.  Outdoors was out of the question.

Based on my earlier experience with Magnetic Loop Antennas, I knew this would be a good solution to his problem.  The only problem was, I had no junk box of parts and my mom had only a limited set of tools. I only had a few days until I had to return to Germany.

I bought about 20 ft. of coax and a cheap MFJ cross-needle watt meter from our local ham radio store.  Everything else was purchased from Lowe's (home improvement / hardware store).

Magnetic loop antennas normally use high-voltage variable capacitors to tune the band. I had no idea where to get one of these within the limited days I had for completing the antenna.  I needed to come up with an alternative 'cheap and dirty' soution.

I solved the problem using the components that I had available - wood and coax.  The total cost was less than $100.

As can be seen in the photo, the magnetic loop was about 3 ft. in diameter, had 2 loops of RG-213 coax, and was mounted on a piece of wood about 6 ft. high.

The challenge was finding a way to tune it.

How can you tune a magnetic loop without a variable capacitor?

The answer was simple, cheap and relatively easy:

First of all I brought it into resonance in the middle of the 40m SSB band by using a stub of RG-213 as a high voltage capacitor. I made the distance between the two windings constant, except at two points on the loop, where I provisioned for moving the windings closer or farther apart by sliding one of the windings along a little strip of wood, and fastening it to holes drilled in the wood.  This would move the resonance in steps of about 15 kHz, up or down, depending on which direction you moved the coax.

The final step was to provide for some fine tuning.  This was accomplished by building a gimmick capacitor out of two 6" pieces of the inner conductor of the coax.  By physically bending them closer together or spreading them farther apart, you could fine tune about 15 kHz.  PERFECT!

Combining the two tuning methods, it was possible to tune to resonance anywhere within the entire 40m band.  Of course you needed a bit of patience and trial and error, but it worked perfectly well.  The SWR was typically about 1.4:1.

Since Hal usually only operated on 7253.5 kHz, it really wasn't a problem.  Once it was tuned to that frequency, it stayed tuned.

Results:  Except on days when there were severe thunder storms, Hal was able to check into the Kadiddlehoppers Net daily and was almost always Q5.  Of course he wasn't bending anybody's S-Meter but he was Q5.

Unfortunately Hal became a silent key a few years later and my family scrapped the antenna.

IF YOU ARE FACING ASSISTED LIVING, DON'T LET ANYONE TELL YOU THAT YOU MUST GIVE UP HAM RADIO.  IT WORKS EVEN WITH AN INDOOR ANTENNA.

A WEE BIT OF TECHNOLOGY:

(I believe it is Central Standard Time)﻿﻿

DOES THIS REALLY WORK ?

The short answer is YES.  It works quite well.

SOME "EXPERTS" MAY TRY TO TELL YOU how something like this cannot work.  They will state all kinds of reasons why it won't work.  WHAT IS THE TRUTH ?

By the way, I'm not talking "theory" here.  I have used magnetic loop antennas at various locations for over 25 years.

Check out my 1992 Isle of Man Expedition operations out of a hotel basement: 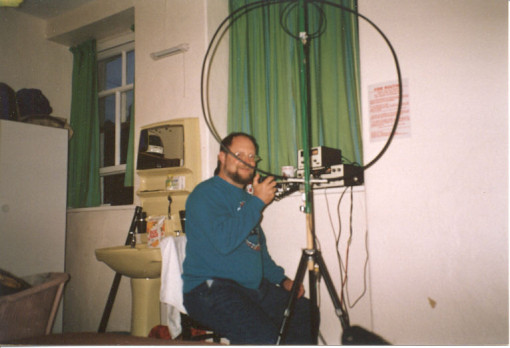 Hotel basement operations on the Isle of Mann, 1992. GD/DJ0IP/p

Running about 40w from this hotel basement QTH on the west side of the island, I was easily working into the European continent on 40 and 20m in SSB.  The antenna shown here is smaller, but similar to my "Old Folks' Antenna".

VK3YE  has also built a simple magnetic loop for 40m without using a tuning capacitor.

He has a YouTube video showing how he did it,