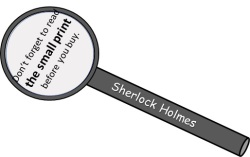 The #1 Biggest Problem we face when looking to buy an RF-Choke is, most people selling the RF-Chokes are not telling us what is inside of their Chokes, AND, in most cases they are over-hyping their chokes and misrepresenting them.

This may or may not be intentional, but it is fact.

I  don't  really  blame  these  people  selling them.   After  having worked 11 years for  a world-renowned antenna company, I have learned that

if you represent your products honestly, NOBODY will buy them.

This is a delimma all manufacturers face.

Indeed, if you believe the marketing of some of the companies selling Yagi antennas, then you can be tricked into believing that their "Short-Boom 3-element Trap Tri-Band Beam" will out-perform the "10-element Wide-Spaced, Interlaced (full-size) Tri-Band-Spiderbeam". These companies  take advantage of "Joe Ham's" lack of understanding of the difference between "dB", "dBd" and "dBi".

There are three ways to present Choke Performance:

And if if the vendor states the spec without specifying the frequency range it applies to, take care, the specs may be significantly different from one ham band to another.

BUYER BEWARE:  Even if you call a reputable ham store and ask for advice, DO NOT expect the person on the phone to understand much about chokes and baluns.  I'm sure there is someone working there who does understand this topic but I am just as sure that most people working at these stores do not.  You have no way of knowing if the person on the phone is their expert, or just a sales person trying to sell you something.

If the person recommend something, ask him/her "why?"

If the only answer is "that's what most people buy", then that person has no idea what he or she is talking about.  Most people buying chokes and baluns don't understand a darn thing about them, so what they buy is of no consequence!

ASK TO SPEAK WITH SOMEONE WHO CAN EXPLAIN 'WHY'.

For that same reason, do not give too much credit to eham reviews.  On this topic, most hams have no idea what they are talking about, don't understand the differences and their review may be completely inapplicable in your situation.

The #2 Biggest Problem is, the manufacturers and vendors selling commercial chokes tend to represent them as "One-Size-fits-all" devices.  This is absurd!

I will show you below just how much difference there can be in similar chokes of similar technology.  (See:  DIFFERENCES IN CHOKE PERFORMANCE)

IT IS VERY IMPORTANT  to know exactly 'where' and 'for what' you intend to use the choke and to understand what exactly you are buying (or building).

DX-Wire in Germany is a leading supplier of components for d-i-y hams building their own antennas, baluns and chokes.  DX-Wire also offers three Maxwell chokes for coax transmission lines, all of which are excellent devices.

Which one you should use depends on the application.

The impedance of an RF Choke, called Common Mode Impedance (CMI), depicts its ability to impede the flow of Common Mode Current (CMC) along the outside surface of the coax shield.  Like with resistors, a higher Ohmic value means it blocks more.  But with chokes, "FREQUENCY" also plays an important role.

The chart below shows the difference in CMI between the three chokes.

NOTE that "frequency" plays a major role in which choke to choose: 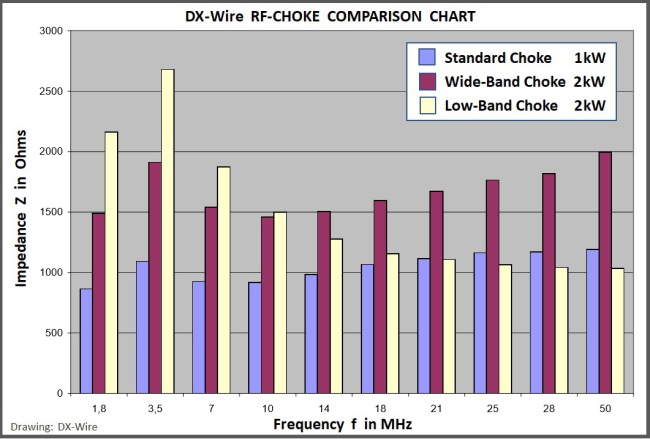 Which choke is the best?

Answer:  It all depends on the application, as well as the bands where the maximum choking is required.  The chokes shown here are all Maxwell chokes.  These are insufficient in some applications and a Guanella choke must be used instead.

In general, I usually use the DX-Wire "Standard Choke" or the DL9USA Choke, unless I have very difficult problems.  Sometimes I build them myself, sometimes I just buy them assembled; they are not expensive.

The table below lists some of the commercially available Maxwell chokes.  The differences are found in the number of beads, as well as the type of beads used.  Notice that some chokes use two different types of beads to enable a higher CMI across a wider frequency range.

As can be seen from the information above, there are SIGNIFICANT DIFFERENCES  from one choke to another. That's why some companies offer more than one product and that's also why you need to know what you are buying...

to be continued . . . Rome wasn't destroyed in a single day!