BEFORE jumping straight to the Test Reviews of each of the transceivers, it is important to realize that:

THIS PAGE will include:

Overall performance ratings is not possible in a table such as Receiver Performance Data, as the web table is sorted by one category only – Close-in Dynamic Range (DR3), which is important in CW contests, pile-ups, DXpeditions, etc.  With the addition of the new Yaesu FT-710, Yaesu’s first direct sampling transceiver, I have updated my list of the top 23 transceivers, and by the end of the month (October, 2022), I will have used 18 of them in at least one major contest.  Here is the list of individual models simply as a starting point. 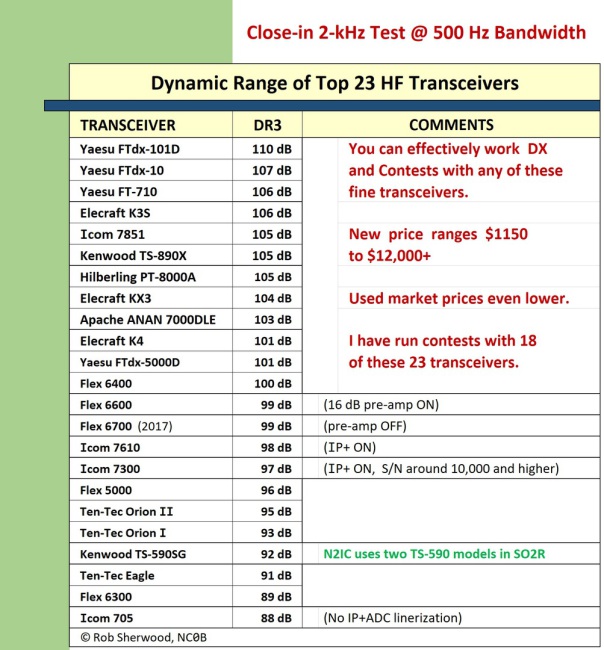 Once the basic dynamic range is more than acceptable at 88 dB, now the task gets much more difficult.  The User Interface (UI) of the different radios is all over the map as are ergonomics.  Those are somewhat subjective, particularly the UI, where I feel Yaesu is sub-par, and Icom possibly on top.

Every radio is adequately sensitive, so that is a given.

Noise blanking and noise reduction is also quite variable not only in the radio’s feature set, but also differs as everyone’s noise is different.  I find the Kenwood noise mitigation features minimal at my QTH but others find different results.  Warren Pratt’s noise mitigation in Apache (ANAN) products may possibly be best in class, particularly in a crowded band.

With every radio today being firmware upgradable, how well each brand follows up with feature additions and bug fixes is important.  Some FTdx-101D owners have been waiting for firmware fixes since day one, and some Flex owners have been less than thrilled by minimal if any progress for years.  Maybe since the Flex military contract appears finished, progress may be down the road.

The Elecraft K4 was barely functional February 2021 when it finally shipped to a real customer, but now firmware R30 appears to have gotten them back in the ballgame.

I really enjoyed using the Kenwood TS-890S but repair of it and my TS-990S were not practical when an EMP damaged both.

What about service once a radio goes out of production?  K3/K3S owners may be in a bind for parts and repair.  Some parts in my Kenwoods were listed as “non-field repairable” and no part number even available in the service manual.  All the new radios today have a wonderful color LCD screen. What happens when it fails?  Can any OEM provide a replacement in 5 years?

What happens on the east coast of the US, let alone in Europe on 40m with megawatt shortwave broadcast stations above 7.2 MHz?  At least during the most recent WRTC-2018 in Germany virtually all brands and models were used and I assume with proper gain/attenuator settings they all performed well.*

It is really important for an operator to understand his radio’s gain structure, particularly the direct sampling radios which are vastly different. 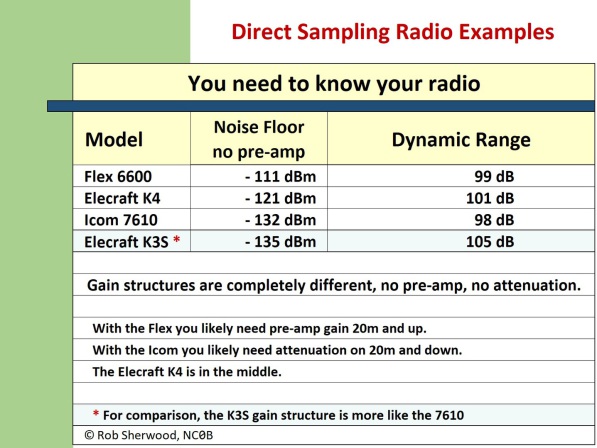 If an operator doesn’t realize how differently the K4, 6600 or 7610 need pre-amp gain or attenuation, these radios may not perform well at crunch time.

Some operators may by default assume “if in doubt turn on preamp 2” !!!!!   Bad idea in many cases, and this came up in a discussion at Contest University several years ago.

The bottom line is, there is great competition and most brands are keeping competitive which is good for all of us.

Reciprical Mixing Testing: What Is It?

LINK  to a "sortable" version of Rob's Receiver Performance List:

I have not completely understood everything above, but one thing is aparent:  DR3 is NOT the only important measurement in defining a radio's overall performance!

Depending on your preferred type of operation, different measurements may be more important than others, and DR3 is not always the most important measurement.

When creating his performance list, Rob Sherwood had to choose one measurement for ranking the receivers.