My Introduction to Ham Radio

Like with many other hams, it all started with a Crystel Set Receiver. 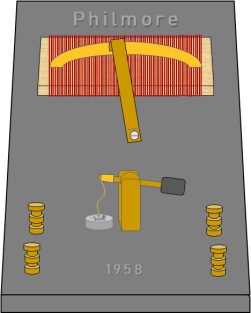 He helped me build it.

It had a very solid plastic base.  The coil was wrapped onto a piece of wood.  Tuning was accomplished with a brass slider along the top side of the coil.  There was no capacitor.

It had 4 connectors:  2 for the headphones, 1 for antenna, and 1 for ground/earth.

We ran an enamel insulated wire out the window to a tree, using an insulator made from a broken Coca Cola glass bottle- neck.  The ground connectio was an insulated wire was run to a water pipe.

The headphones were black plastic and kind of hurt the ears, but I didn't care.  I was the proudest kid on the block with this radio!

At the time we were living in or rather near Chicago.  I can't recall which stations I could receive, maybe WLS.  That was a long time ago.

In April of 1959, my family moved to Zweibruecken, Germany.

We lived on the 2nd floor of a large 3-story appartment house.

I ran an enamel insulated wire out the window, across the street and to a lamp post on the other side of the street.  I connected the ground wire to the heater/radiator.  This was a great antenna and I was able to receive all kinds of stations in several languages, foreign to me.  I could also receive American Forces Network (AFN) and Canadian Forces Network (CFN) in English.

One day as I was listening to my Xtal Set, suddenly a BOOMING LOUD signal came in over everything.  It hurt my ears so badly, I threw the headphones from my head.  It soon disapearred.  I had no idea what it was.

This became a regular occurance.

I found if I removed the antenna lead and only used the ground attachment, I was able to copy the signal at a comfortable level.

To my surprise, the voice was speaking American English.  Occasionally he said "DL4EU". I can't recall his first name; for me he was Captain Dixon.

I listened with enthusiasm for hours on end, wondering why I couldn't hear the person he was talking to. Eventually he gave his address over the air.  I wrote it down and went looking for it.  Found it directly next to the lamp pole that my antenna was running to.

In the evening I returned and rang his doorbell.  I was greeted by a pleasant young man who laughed as I told him my story.  He invited me in, demonstrated a QSO and the bug bit me.

I had to have a "real" receiver.

Initially I chose a Knightkit "Ocean Hopper" which was a super-regenerative receiver.  Capt. Dixon talked me out of that and recommended I purchase Heathkit AR-3, a super-hetrodyne receiver.

I ordered the kit in time for Christmas, 1958, and built it (under his surveillance) in January of 1959.   By February I was good to go; happier than a kid in a candy store. 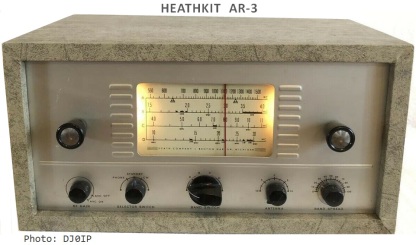