An "Assymetrical" or "Unbalanced" Matchbox is a matchbox that was designed to be used primarily with unbalanced (asymmetrical) antennas.  These are typically coax-fed antennas but may also be other types.

A SIMPLE DIPOLE may sometimes require a matchbox under certain conditions:

Although we could use a Pi-Network or Link-Coupled matchbox, with just one exception, you don't find these offered commercially anymore.  The simple reason:  "cost".  The other solutions use components which are not as costly as these two.

THE SHORT ANSWER IS:  EACH HAS ADVANTAGES AND DISADVANTAGES.

WHICH ONE  YOU  SHOULD YOU USE DEPENDS ON MANY THINGS (described below). 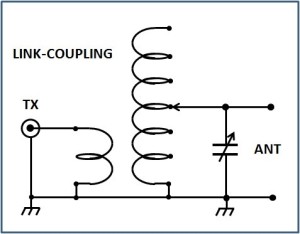 Link-Coupling is one of the oldest technologies used for matching an antenna to the transmitter.  There are many different configurations of link-coupling, from very simple, like the one shown on the right, to very elaborate circuits using differential capacitors.

The efficiency is very good but covering multiple bands can be a challange, especially for the bandswitch.

This is probably the main reason that Link-Coupling is not found commercially available.

I will cover Link-Coupled matchboxes in more detail under Symmetrical Matchboxes.

[The 2 most popular circuit designs for asymmetrical matchboxes.]

At first glance, the T and L circuits are very similar, with the T having just one more component than the L.  There are advantages and disadvantages of both technologies.

Most matchboxes today are T-Network. These matchboxes share common routes back to the original "Ultimate Transmatch", described by Lew McCoy, W1ICP (SK) in QST in 1970 (possibly earlier).﻿  Their advantage is that they use common components and don't require a lot of fancy switching.

The L-Network appears even simpler, but in practice it is not.  It requires more switching and some pretty hefty component values in order to be able to match as broad of a range of impedance as the average T-Network matchbox.  Hower when matched, it is always matched at the point of maximum efficiency and generally more effecient (less internal loss) than the T-Network.

For more details, see below..

In theory, the L-Network is all you need to match any impedance.  As I said, "in theory."

In practice, in order to match a broad impedance range, you need some very large, and very small values of components. In addition, a large variable capacitor capable of matching on 160m is very expensive and would have too much minimum capacitance for use on 10m.  As a result, a much smaller variable capacitor is used together with several fixed-value capacitors, switched in when required.

There are a handful of L-Network matchboxes on the market but most do not incorporate the complex switching circuit to enable it to match from 10 Ohms to 3000 Ohms.  To my knowledge, currently the only L-Network on the market that can do this is the TEN-TEC Model 238, and its successors, the Model 238-A, the Model 238-B, which are only available used.  The current Model 238-C is still available new, but it is not cheap. 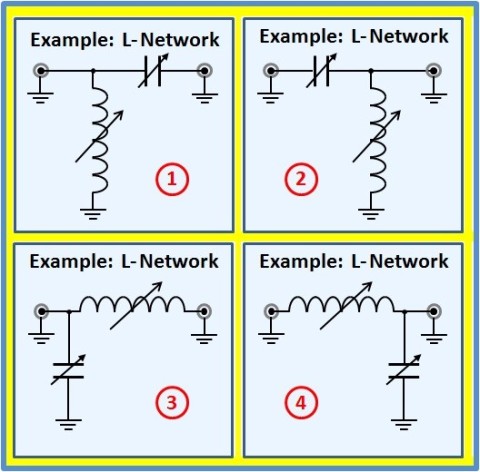 Shown above are the 4 "possible" configurations of an L-Network.

Versions 1 and 2 are high-pass matching networks.

Versions 3 and 4 are low-pass matching networks.

In practice, usually only versions 3 and 4 are used for Antenna Matchboxes.

The L-Network is a very efficient, low loss matchbox.  Unfortunately it is difficult to design enough hardware into one single matchbox which is capable of matching both low impedances and high impedance across all HF bands.

As a result all L-Network matchboxes are expensive and many have a somwhat limited matching range.

If you are looking for a good matchbox for a specific impedance range, and highest efficiency is your main criteria, the L-Network  is the way to go.  If you want one that does everything, be prepared to spend a lot of money.

PERSONAL COMMENT:  I own a TEN-TEC "Model 238-B"  L-Network Matchbox, and it falls into the category, "til death do us part".

In the past 30 years, the T-Network has established itself as the most popular matchbox design found in most ham shacks.  It is a simple design that easily covers multiple bands, and it can be built using common, inexpensive components.

The T-Network can easily match a broad range of impedances, making it the ideal matchbox for matching "whatever comes your way".  Unfortunately it is not always the most effecient matchbox.

The BIGGEST PROBLEM with the T-Network is its internal loss - power lost inside the matchbox. Through improper tuning by the operator, the losses can be even higher - sometimes 50% or more.

This is probably the best matchbox technology for most hams who are just beginning and do not know yet what they will ultimately need.  Selecting this matchbox technology is a low-risk choice, BUT IF YOU DON'T TUNE IT RIGHT, YOU MAY LOSE UP TO 50% OF YOU POWER INSIDE THE MATCHBOX.  It is possible to get better solutions for some antenna applications, but at least this matchbox should always find a good match to the antenna.  GOOD STARTER MATCHBOX!

IF YOU CHOOSE THIS MATCHBOX, YOU MUST LEARN HOW TO TUNE IT PROPERLY! 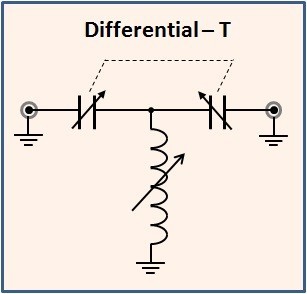 At first glance, it looks just like the classical T-Filter matchbox.

A closer look reveals the differences:

These simple changes result in the circuitry finding only one single point of best SWR, and this point always coincides with maximum effeciency.  This eliminates the main problem with the original T-Filter matchbox: user error.

In the interest of keeping costs low, istead of using two separate capacitors ganged together, typical commercial units use a single "differential capacitor".  This capacitor is a lot longer than a normal variable capacitor, and madates using a much deeper cabinet.  To fit it all into a managable size, the maximum value of each half of the capacitor is not as high as the value typicall used for each capacitor in the original T-Filter.  As a result, the Differential-T matchboxes currently on the market do not cover as broad of an impedance matching range as the original T-Filter matchbox.

ADVANTAGES OF THE DIFFERENTIAL-T MATCHBOX:

DISADVANTAGES OF THE DIFFERENTIAL-T MATCHBOX:

BOTTOM LINE:  THE DIFFERENTIAL-T IS A GOOD CHOICE WHEN YOU ARE LOOKING FOR A HIGH POWER MATCHBOX WITH A TUNING RANGE SIMILAR TO THE RANGE OF THE BUILT-IN TUNERS FOUND IN TRANSCEIVERS.

The Pi-Network Matchbox, like the Link-Coupled Matchbox, is more of a device from the past, rather than the present.  This is in no way due to its performance, but rather to the cost of the components required to implement a Pi-Network Matchbox capable of matching the required impedances on all HF bands.

The Pi-Network matchbox has very good efficiency and also has the added advantage of surpressing harmonics.  Although this is old technology, it is still a great concept.  It's only problem is, it is expensive to implement in a way that it has a broad impedance matching range over the entire hf spectrum.

I know of only one company (HamWare) making and selling Pi-Network Matchboxes today.  HamWare is located here in Germany and its products are VERY EXPENSIVE - (and also very good).﻿

The Pi-Network Matchbox is a great technology, with very low internal loss and it also offers good harmonic surpression.  Unfortunately the cost of components today has delegated this technology to the history books.

In the past, companies such as R.L. DRAKE marketed Pi-Network matchboxes.  In the meantime these have become collectors' items and are difficult to find.﻿

[ NEXT PAGE:  TUNING THE T-NETWORK MATCHBOX }>>