RATING THE MAXIMUM POWER OF A MATCHBOX IS A DIFFICULT TASK.

How much power a matchbox can handle is dependent on several factors:

If the plate spacing of the capacitor is too small, you can incur arcing across them with higher SWR or too high of power.

If the contacts surface area of the switches are too small, they will burn with excessive current due to high SWR or too high of power.

With the power rating depending on so many factors,

it is very difficult to state a realistic maximum power rating of a matchbox.

IS THERE A BETTER WAY?  (YES, OF COURSE)

If a company wants to specify its ratings honestly, they will need to show a power rating (and de-rating) curve, such as the example below, which shows how DECCA rated its KW-109 SUPERMatch.

The Power Rating (and De-Rating) curves specified by DECCA in the chart below, depict a clear picture of what the matchbox can safely match.  It shows power levels by mode, and how the antenna SWR affects them.

ALL MATCHBOXES WORK LIKE THIS.  THEY ALL HAVE A DE-RATING CURVE.

(but the manufacturers don't tell us this information.) 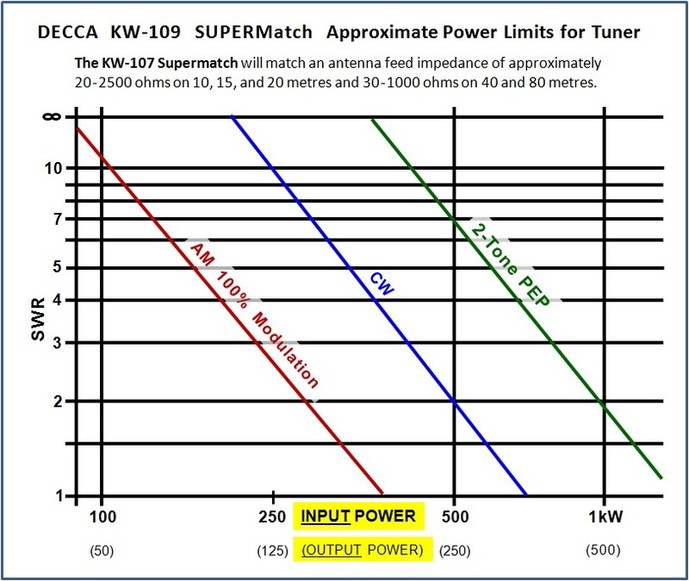 NOTE:  DECCA rated its matchbox according to "Input Power", which was typical during the first 60 or 70 years of amateur radio.  I (DJ0IP) have added the lower line which shows "Output Power" to be roughly half that of Input Power.  The bottom line was not stated by DECCA.

NOTE ALSO:  DECCA clerly showed a distinction according to the mode of opperation.  Note that CW is about 2/3 as high as SSB.  In today's world, we could substitute RTTY for the AM line.

This is the question we expect the Marketing Department of all Matchbox Manufacturers to answer honestly.  BUT HOW ON EARTH DO YOU REALISTICALLY ANSWER THAT QUESTION?

SOME REALITIES ON MATCHBOX POWER RATINGS:

Palstar rates most of its matchboxes as follows:

OK, this is a step in the right direction.

It indicates that some impedances (low Z) can require reducing power, but it fails to indicate how low or how much we must reduce power.  A power de-rating curve would be helpful.

You often hear that MJF overstates their power ratings for their matchboxes.

This is not really true.

The FACTS:  about 25 years ago the rest of the world switched from stating "Input Power" to stating "Out Power".  This was because of two things:

MFJ chose not to change its advertising, and continued to state Input Power.

This is not wrong, but it is certainly misleading.

In my opinion, this is part of the reason that many hams burned up their MFJ matchboxes.  We can only assume that MFJ's Marketing thought it was a good idea not to change, but in the end it has hurt thier reputation.  BUT THEY ARE LEARNING.

In the meantime, all newer matchboxes from MFJ are also rated with Output Power...but, please keep in mind the De-Rating Curve which EVERY matchbox is subject to.