IMPORTANT NOTE:  I have written permission to use all of Annecke's original publications and pictures on my web site.  This permission was granted by Fred Annecke, Alfred Annecke's son.

GERMANY's ANSWER to the

and much, much more! 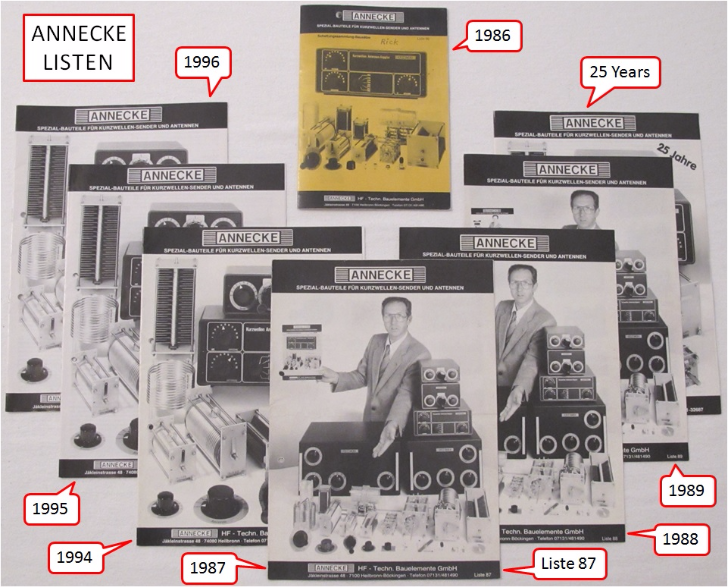 Some time in the 1980's (1984?),  he began offering antenna coupler kits, as well as high quality components for ham radio enthusiasts who wanted to build their own antenna matchbox.  He also offered them fully assembled for those who chose not to build it themselves.

Although his initial focus was on balanced matchboxes (symmetrical couplers), he expanded his product portfolio over the years to include many of the other popular circuits.

More important, Annecke introduced the German-speaking hams to a wealth of information about building efficient multi-band wire antennas, describing their construction in great detail and providing the 1-stop-shopping for everything they needed for their project - including the cabinet.

Alfred Annecke did not just build “me-too” matchboxes like all the other OEMs build.

He was a perfectionist and did it right.

Each year Annecke printed a new "Liste".  You se many of these in the picture above.  I have original Listes from many of the years but from 1984 (my ealrliest), I only have a copy.  On the cover is shown his first "Symmetrische Koppler". In all of my years of carefully following Annecke and his products, I have only ever come across one of these first units.  They are very rare and clearly a collector's item.

It is not easy to describe Annecke's product portfolio because he never gave his products a model number.  He has names for everything but any given name could have described 3 or 4 similar matchboxes, each slightly different from the others.  It was also rumored his kids had no names but I met his son once; he had a name, "Fred".

Alfred Annecke was a true Elmer and helped hundreds of hams to understand how to build and match efficient "antenna systems" - either directly in person or on the phone - or indirectly through his catalogs and pampflets.

Much of what I know today emerged from talks with Alfred, purchasing most of the components he manufactured, and trying them in different circuits.

World War II Army Surplus had been the main supply line of components for hams wishing to build high power matchboxes. Eventually this channel dried up and other sources were rare and very expensive.

With a machine shop at his disposal, Alfred Annecke was able to manufacturer the hard to find (often impossible to find) components himself.  All of the variable capacitors, switches and inductors used in his products were manufactured in his own shop.

As can be seen in the picture above, he developed a very diverse line of products and components.

I was one of his happy customers.

I built a high power switchable T-Filter matchbox using his heavy duty coil, switch, and capacitors.  I prefered this solution to using a roller inductor, because in the interest of contesting, I wanted to have fast band changing.  Alfred advised me on the phone of which components I would need, and a few days later I was building my dream matchbox.

When Alfred Annecke passed away, a ham radio legend died with him.  Within a very short time, the resale value of his products on the used market rose, and his matchboxes were selling for more money than they had originally cost when new.

THE PURPOSE OF THIS SECTION OF MY WEB SITE IS TO HELP PEOPLE UNDERSTAND ANNECKE'S PRODUCT PORTFOLIO AND KNOW HOW TO IDENTIFY THE MODEL OF AN ANNECKE MATCHBOX WHEN THEY SEE ONE.