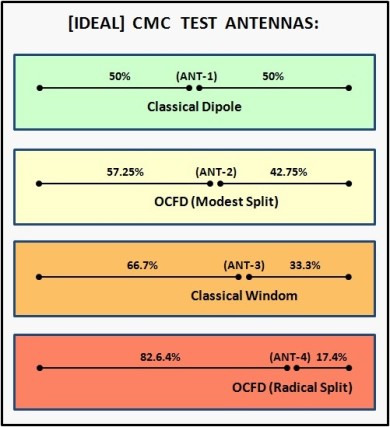 4 Antennas would be tested:

Since it is a Common Mode Current (CMC) test, the antennas are pictured here in colored backgrounds depicting the severity of CMC I expected to find on each antenna's  feedline.

UNFORTUNATELY THE REALITY IS SOMEWHAT DIFFERENT!

Due to the size and shape of the space available for testing, as well as the lack of trees on one side, it is only possible to test the antennas in an Inverted-V configuration.

This is a fair question and I have chosen it with good reason.

In the past 2 years I have been building and playing with various kinds of antennas, but mostly Off-Center-Fed Dipoles and End-Fed (with coax) antennas.  I have encountered some interresting run-ins with CMC on both of these.

The second thing I noticed was that CMC trouble on the OCFD antennas was often severe on the fundamental frequency but significantly less on the harmonic bands.  I contribute this to possibly two things:

Since 40m is my favorite band and I typically build antennas on 12m fiberglass poles from Spiderbeam, with an maximum useable height for the feedpoint of 10m, that's what I decided to test.

This way I eliminate the possibility of results run on a 20m antenna not being applicable to 40m. 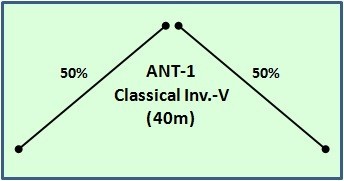 The classical dipole will be tested without a balun, then again with different types of baluns.

One of the tests will intentionally run the coax at a 45 degree angle to the plane of the dipole.

Similar to the original "Fritzel FD-3", this is a 40m Windom (or OCFD) with the classical Windom feedpoint split.

This multi band OCFD, originally published by K1POO, had great SWR on 40/20/15/10m but unfortunately suffers from extreme problems with CMC.  For that reason it will only be tested with a dual-core 4:1 Guanella Balun.  Length: 20.5m.

Variations of the Antennas

The Classical Dipole is the ony antenna that I will test without a balun.

Of course I will also test it with various baluns and chokes.

The Windom/OCFD antennas will each be tested with several types of baluns.

More on this is shown under "The Baluns".

I will also insert a variety of CMC chokes at various points in the feedline and repeat all measurements.

More on this is shown under "The Chokes".

There will be a dozen or more types of tests run on each variation of each antenna.

More on this is shown under "The Tests".

TO "THE COMPONENTS" è