I HAVE NOT YET TRIED THIS ANTENNA!

Normally I do not publish antennas on my web that I have not yet personally tried, but with this antenna I will make an exception.

DO YOUR OWN DUE DILIGENCE. 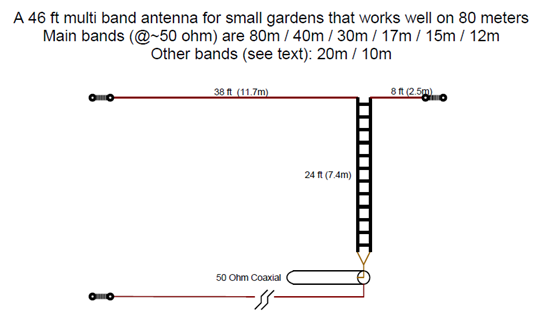 This antenna was first conceived as a simple dual band antenna in 1988, in an attempt to achieve sensible dual band operation in a small garden of 14m (46 ft) length.

Evolving from a simple end-fed Marconi for 80m, the idea was to use the opposing harmonicrelationships of two ¼ wave elements so that they could be fed on odd harmonics without mutual coupling.

This principle has been used with nested dipole antennas and other specialist multi-band antennas such as the Cobweb, but because of interaction and coupling issues, it’s rarely implemented on end fed wire antennas. With this version of the antenna, interaction between elementsand top resonance have been turned to our advantage allowing for excellent multi-band working, while maintaining a useful radiation pattern and efficiency on almost all Amateur Radio bands.

The suggested dimensions provide for low radiation angle (30 to 40 degrees) on all bands except 30m where the antenna acts as afull size horizontal dipole.

Low VSWR is achievable on most bands and, with careful construction, up to four bands can be usedwithout ATU.

Radiation resistance is in the range 25 to 200 ohms on all bands, ensuring high radiation efficiency, even with moderate earthing arrangements. Unlike the Windom or G5RV, the fundamental bands can be resonated independently.﻿

For more information, download the file below, or visit G7FEK's web site: HERE.