WHICH TYPE IS BEST ?

As seen on the previous page, there are different kinds of OpenWire feedline.

How do we determine which one is best?

ANSWER:  There is no such thing as "best".

Each type has advantages and disadvantages.  The differences are found in size, weight, appearance, loss in dB, cost, ease of working with, and if home-brew, ease (or difficulty) of construction.

The application and user preferences will determine which type to use.

Ladderline consists of two wires held parallel by spacers.  There are only a few companies making and selling ready-built ladderline.  In most cases, the operator must build the ladderline himself (or herself).

It is possible to vary the impedance by adjusting the spacing between the wires.  A wider spacing means higher impedance.  Some people believe a 600 Ohm line will have less loss than a 450 Ohm line.  It is questionable whether the difference in theory will make any tangible difference at the other end of the QSO.

More important, ladderline maintains its impedance and velocity factor much better than other types of openwire feedlines, even when it is wet or covered with snow or ice.  It is also less susceptable to wind than Windowline or 300 Ohm Twinlead.

If built using thin wire and clear Plexiglas spacers, it can be made nearly invisible, or at least much less conspicable than the brown or black Windowline.

Usually you must build this yourself.  This involves a bit of work, but it is not difficult if you sellect the right spacers.  (See: D-i-Y Ladderline).  Openwire is a bit more difficult to work with, especially for making bends or going around corners.

Windowline is commercially available from many sources, though the most common source is THE WIREMAN or one of its resellers.  This feedline comes in several different sizes, all of which are commonly said to have 450 Ohms impedance.  In reality the impedance depends on which model of Windowline you choose.  (See table below).

Windowline is usually made of CopperWeld (copper-coated steel wire) and as such is very strong.  Never-The-Less it DOES BREAK.  It often breaks at the point it connects to the antenna.  You can buy it with stranded wires or with solid wires.  Regardless, they both break over time unless you take very good care to strain-relieve the feedline, such that there is no strain on the solder connections or bare wires.  The strain-relief must include the insulation.

Warning: you will hear arguements for both types, claiming one is better than the other.  Forget it.  Rely on proper strain-relief, not hear-say from hams.

There are severeal kinds of insulators providing good strain-relief in one form or another. It is also very simple to build your own out of Plexiglas or Epoxy Board (FR4).  See below.

You can buy it ready-built and simply begin constructing your antenna.  Easier to work with than ladderline.  It holds its shape even when bending or going around corners.  (AVOID 90 DEGREE BENDS).

You can buy center insulators (including good strain-relief) that exactly fit the 450 Ohm feedline.  (One size fits all).

You can buy more later, in case you ever need to.

Contrary to popular belief, it does NOT lose significant efficiency when it gets wet or covered with snow.

When it gets wet, especially covered with snow, its velocity factor changes, which requres a re-tuning of the matchbox.  For most people this is of no consequence.  If operating a contest and desiring rapid band change, this can become annoying because there are different matchbox settings for each band, depending on whether it is wet or dry.

This feedline is very conspicuous and can be an eye-sore to neighbors.

It also tends to blow around in the wind more than ladderline because its insulation has more surface area to catch wind.

Disclaimer:  I believe the results shown in the table above to be accurate, but I have not measured the VF myself.  Do your own due dilligence.

Also called TWINLEAD;  this is a balanced feedline with a solid insulation between both wires over its entire length - with one exeption; Wireman sells a 300 Windowline that is much like Twinline.  You may call it by either name.  Important is that you know the difference between it and other types of twinline or windowline.

Twinline is one of the oldest types of feedlines in existance.  It was used universally for television in the days before Cable TV and SAT TV.  Although it is usually 300 Ohms impedance, the European version was often 240 Ohms.

In addition, a 75 Ohm version was found in transmission lines many years ago, but I haven't seen it manufactured commercially for 25 or 30 years now.  It is very difficult to find.

I have also seen it in older military applications, where its impedance was about 100 Ohms.

It is possible to build your own twinlead by taking two identical insulated wires and running them next to each other, touching over their entire length.  They can be held in place with short strips of heat-shrink tubing, but this is not a very practical way of making it.  The impedance is usually between 90 and 110 Ohms.  I do not recommend using this method.

Twinlead has more loss than Windowline or Ladderline.  How much loss depends on the construction of the feedline (e.g., composition of the insulation and whether or not it is interrupted with tiny windows, similar to window line).

The velocity factor of solid twinline is usually about 0.80, but the Wireman version resembling windowline is 0.91 (same as other Windowline).

This is smaller (closer spaced) than 450 Ohm windowline.  It weighs less and is less conspicuous.  It is very easy to work with and can even be run through a relatively small hole in the wall of the house.  This feedline is often favored by SOTA or other portable operators because of its size, weight, and ease of use.

Bending and going around corners is no problem but again do not bend at 90 degree angles.  Use gentle bends to go around corners.

The single biggest disadvantage of this type of feedline is that it has more loss than the other two types.  Certain types can not handle high power levels, though they are all good enough for a couple hundred watts, which is what we typically find in portable applications. 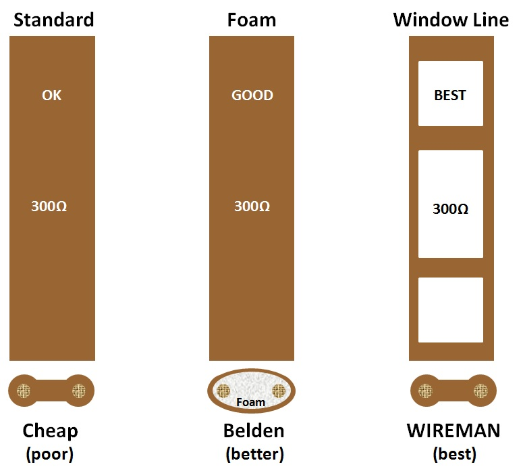 The end view, shown below in the picture above, shows the difference in construction of the three types of twinline.  Always consult the manufacturer's specs for the exact velocity factor of the feedline.  This is important to know when calculating best lengths.