Here is a warning that you will often hear from various Guru's:

WARNING:  Never use an unknown Torroid for anything!

You are shooting yourself in the foot if you ignore this warning.

So in the past, I have only purchased (new) ALL of the toroids that I plan to use; probably about a hundred.

PROBLEM:  Despite efforts to mark them, after a few years I found myself looking at some of these dark grey doughnuts and wondering which kind they were.

I find it risky to measure just one turn of wire on a Toroid, so I wrapped 10 turns of hookup wire onto each core and measured several, recording the uH of each.

In come cases I measured twice, once with a contiguous wind in one direction, and a second time cross-wound using the Joe Reisert (W1JR) method.

A friend (N4CY) repeated several of these measurements and we found his measurements to be so close to mind that I didn't bother to record them.

HERE IS WHAT I MEASURED: 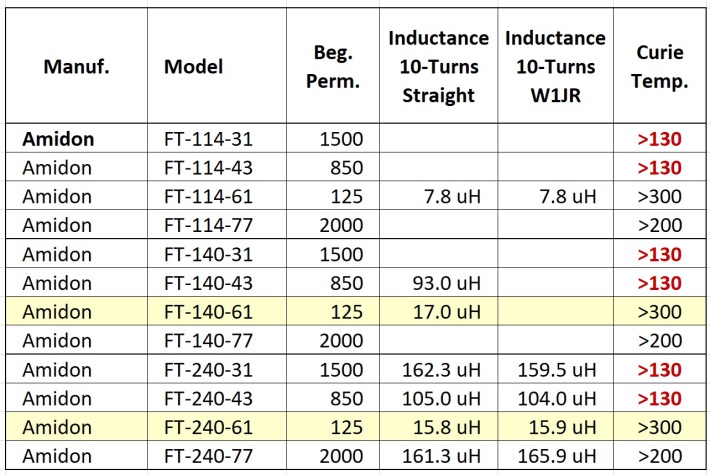 Notice that winding in a straight wind, compared to cross-winding (W1JR) made little to no difference in the amount of inductance.  But, when cross-winding, remember that the fold-back counts as one turn.

In general, the measured values are far enough apart that there is very little risk of mixing up two different types - except for #77 with #31.  I do not personally use #77 in toroid-based chokes, just beads-over-coax, so in my case there is no chance to mix up core types.   The #77 measurement was made by N4CY, not by me.