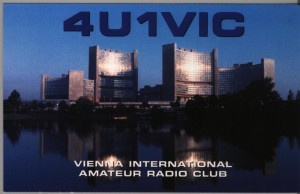 The Club Station of the United Nations - (Photo: John Oakberg)

A VIEW OF VIENNA FROM OUR QTH:

Getting into the United Nations building is the hardest part of the expedition.  Security is very tight and they do not let you in the building until 6pm Friday evening.  This gives you exactly 7 hours to get all of your equipment unloaded, hauled to the top of the building, and set up.

The VIC actually consists of 3 buildings, or rather 3 towers. They come together in the middle, but when looking at it from above, it kinda looks like a 3-point star.  This is great for antennas.  If you simply hang a dipole from the end of one building to the end of another, it ends up completely in the clear, and over 125 meters in the air!  Indeed, our antenna were higher than the local commercial transmitting tower, as can bee seen in the picture above. 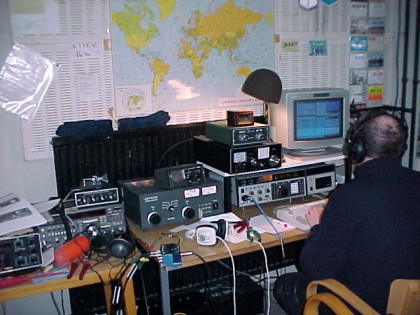 Other Views of the Operating

AND WHERE WAS RICK? 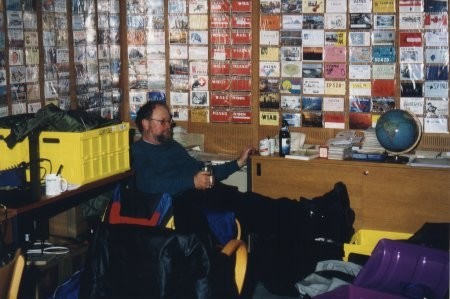 Unfortunately Rick had another accident this year.

Like last year, Rick fell again while putting up antennas. Below you will see a picture of the antenna farm on the roof top.  I was carrying a heavy base for one of the verticals, stepped in a rock pit in the roof and twisted my ankle.

Normally you don't exactly die from a twisted ankle, but that started a chain of events. Our hotel was about a mile down the road.  Our only transpertation was "walking" because there was no place to park my truck.  I could not walk.  So I slept out in the stairway, without any blanket, sleeping bag, or pillow. As a result I got dreadfully ill.  I had fever, etc.  I don't think I made a single contact that year.

Once home, my YL (now XYL) Sibylle took me to the hospital for x-rays on my ankle.

Again nothing broken but my pride.  And I missed a few days of work. 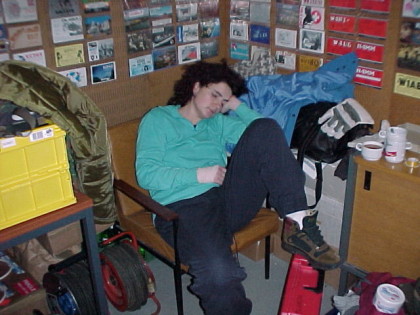 Nah, she was just tired from working DX and putting up with the boys in the shack.

AND NOW THE ANTENNAS:

We only needed one mast for the beam.  However it was too long for the elevator so a couple of the youngsters carried it up what seemed to them to be 1000 flights of stairs.

The dipoles were simply strung between the corners of two buildings and fastened to the grounding bar running around the roof.  Using a long rope, we could simply walk the end from one building to the next.

THE GOOD NEWS:  at least they have nice clean bathrooms at 4U1VIC.

THE BAD NEWS:  they are at the end of this hallway and we didn't bring a bicycle: 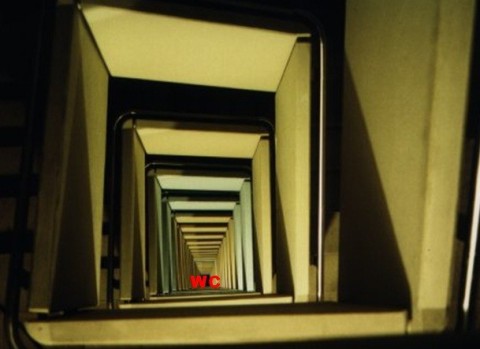