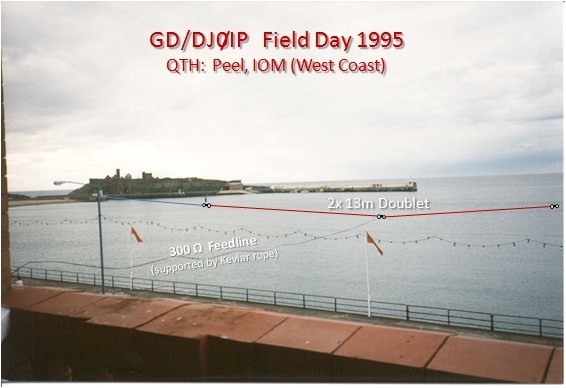 1995 Field Day Location: Peel, IOM. I have enhanced the antenna in the picture for clarity. - (Photo: DJ0IP)

Unknown to me at the time, this was to be my last ham radio expedition by motorbike.

As you can see from the picture, I went back to my 1992 location in Peel, on the west coast, but the weather looked bad and I wasn't getting any younger.  I decided to participate in the "Fixed Station" class... inside the warm hotel.  Note: European Field Day is the first weekend in June, not the last weekend in June like in the states. 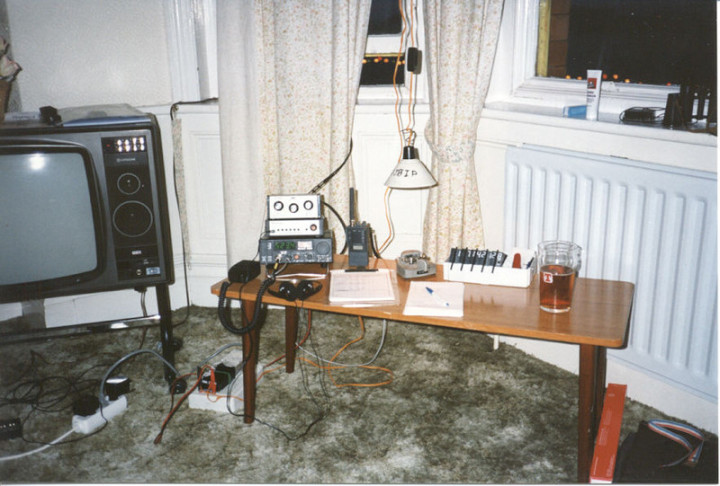 In 1995 I went indoors.  I was becomming a "sissy",  or "girlie boy" as Arnold Schwarzenegger calls it.

The antenna, as seen in the previous picture, was a doublet fed with 300 Ohm openwire.  I threaded Kevlar rope through it so that there would be no strain directly on the feedline.  At high tide, the antenna is almost directly over salt water.  Nice! 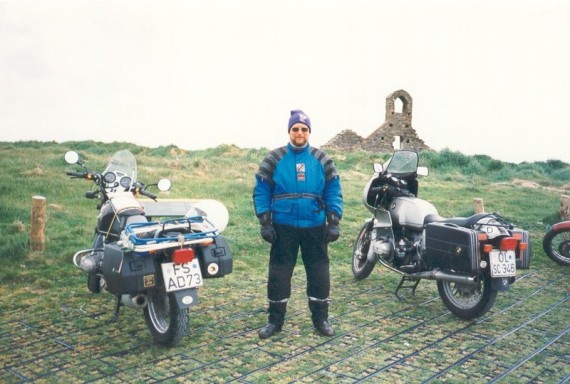 Our Beamers near the old church ruins. - (Photo: DJ0IP)

In 1995 I did the IOM trip together with Reinhold, DF2BB.  His Beamer is on the right, mine is on the left.

The stuff on the back of mine is what I typically took with me on the day's outing where we would watch the Tourist Trophy motorbike races when they were running, or visit touristic sites on the off-days.  I took my small chair and stuff to make coffee.

Although it might appear I was becoming a sissy, on the way back to Germany, after taking the ferry overnight back to Liverpool, and riding to about 50 miles north of London, the next day I got up early, departed at 8am, rode down to Dover, took the ferry over to Belgium, and at 11pm I arrived home in Munich, Germany - on this naked bike. That was 14 hours of hard riding, mostly at 100 mph.

But... after arriving home, I spent the next two days on the livingroom couch, totally exhausted.  Girlie Boy?  Maybeeee!