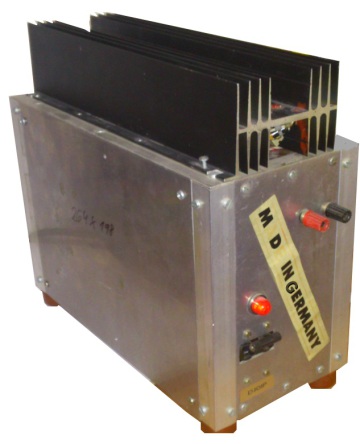 I did not buy the matching Power Supply, but I did buy the AirPax Circuit Breaker.

I ran the Omni off of a car battery until I could build a reliable P.S. for it.

I was determined to build a very rugged, reliable and silent power supply.  40 years later, it's still running, so I feel I can safely say, "Mission Accomplished."

Switching power supplies were not yet mainstream at the time.

The circuit below is proof that my current (2015) STRONG OPINION of "KISS" was already embedded in my brain, 35 years ago: 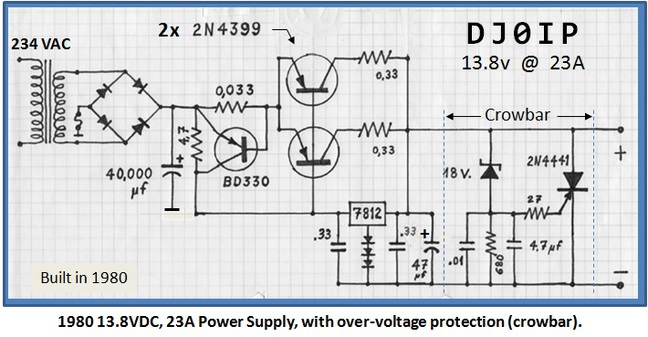 CAUTION:  I believe there is an error in the schematic.  The 0.33 Ohm collector resistors in the two pass transistors are probably 0.033 Ohm.  I will take it apart (some day) and check to confirm which value is correct.

This power supply was built on a home brew chassis, and has a HUGE heat sink on top.  It does not have a fan (does not need a fan).  The original circuit which was in the March, 1976 issue of cq-DL Magazine, called for a single 2N5683, which was very expensive.  I substituted two 2N4399, which we had excess stock of in my QRL, out of older terminals which were being scrapped.

The crowbar circuit is on the right of the schematic, between the two parallel dotted lines.  The cost of all the components is probably under $10.

To test the crowbar, I connected a 65w auto headlight to the output, as dummy load, then using a high power, low Ohm resistor, I jumpered the Emmiter - to - Collector of one of the pass transistors, which caused an instant jump in voltage.

The power transformer was purchased for peanuts at a flea market, just to get the core.  I took it to  a local transformer repair shop and had them remove the secondary and wind a new secondary to my specs.  I had it wound with a few volts more than I needed, and carefully unwound, turn by turn, until I found the sweetspot having enough voltage to always maintain full output, yet avoiding too much voltage, which would cause constant excessive heat dissapation in the heat sinks.

This power supply has worked for 40 years, but it is no longer my main power supply.  I have dedicated switching power supplies for each of my three transceivers, and only use this P.S. to power all of the accessories in the shack. 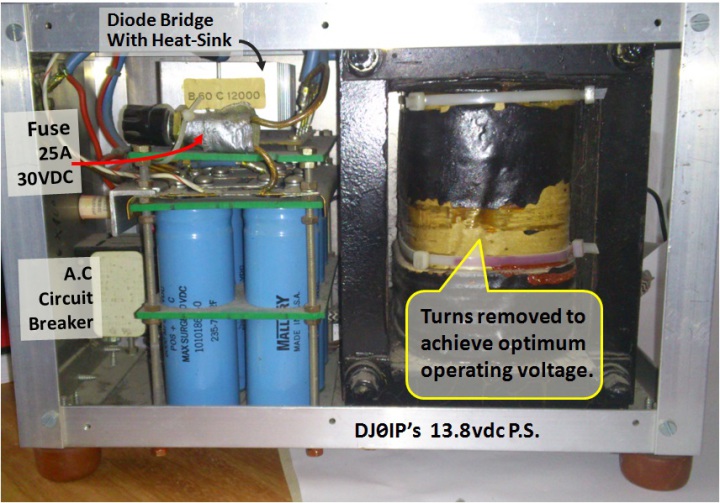 Like the photo says, it sure isn't going to win any beauty prize.

This power supply was built to last and indeed it has lasted 40 years.

The DC fuse has never blown except in intial (forced) short circuit tests.

The heat-sink will get very warm in a contest, but never so hot that you cannot touch it.

And of course it is perfectly silent.

When I first built this power supply, it would work fine with fixed loads such as the headlight from a car, but when used with varying loads such as an SSB transceiver, it would suddenly go into oscillation and blow out all kinds of components.  Took me weeks to discover what was causing it.

CAUSE:  The base of the 7812 regulator connects [through 3 diodes] to ground.  I had mounted it to the main heat sink and used a very thick wire to run to ground.  Although this was an excellent DC short, it was acting like an inductor at UHF frequencies.

FIX:  I spoke with every engineer on the planet that I knew, tried all kinds of suggestions, all kinds of capacitors; nothing helped.  Finally in my research I read somewhere that it was very important to connect the regulator to the same physical ground as the electrolytic capacitors.  I moved the 7812 from the heat sink to an angle-bracket attached directly to the capacitor bank.

THIS FIXED THE PROBLEM!

The bums never taught us that in school and it was one of the most expensive lessons in my life!

I killed countless transistors until I finally solved the issue. 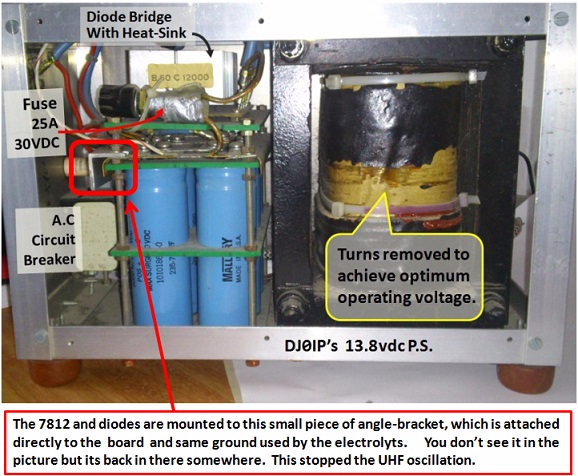 40 YEARS DOWN THE ROAD . . . somehow this power supply seems to keep getting heavier and heavier, year after year!