The following information only applies to:

When interfacing the Orion-1 with any ACOM linear amplifier, and using the 2-cable amp-key interface for full-QSK keying, the ACOM amp often (and regularly) trips its "ARC-FAULT" line and places the amplifier into standby mode.

In 2005, after long researching by Ten-Tec and ACOM jointly - along with 3 or 4 users*, the cause of the problem was found and a "Field Fix" was created.  The fix was to supply all customers who owned an ORION-1 and ACOM amplifier with a high-pass filter which suppressed signals below 1.6 MHz.

Customers were happy, the Orion-2 soon announced and it no longer had this issue.

The "Field Fix" was not actually a fix, it was just a crutch;  a bandaid to mask/patch the problem and enable the two divices to work seemlessly together without triggering ARC-FAULT. 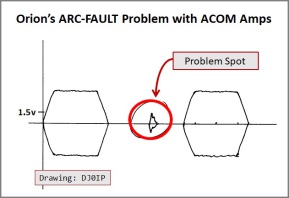 Although the rise-time/fall-time of the Orion's CW RF waveform was perfect, it was found that a tiny 1.5v spike was being generated soon after the bit completed.

Though not audible, its signal strength was strong enough to trip the ARC-FAULT circuit in the ACOM amplifier.

After a long search in the Ten-Tec lab, Jach Burchfield determined that the spike was being caused by a noisy +10 vdc regulator on the 81906 RF Converter board.

In theory, the fix was very simple.

That was 13 years ago and it's all kind of foggy now.

UNLESS you are comfortable soldering components on a printed circuit board, you should probably not implement this fix.  Instead, use the alternative High-Pass-Filter method.

These filters are no longer available from TEN-TEC but I have tested it and found the DUNESTAR HPF-400 to work just fine.

In searching through old emails, I came across the information below.

It describes a simple HPF that should fix the problem.

Although I owned an ORION at the time, I did not own an ACOM amplifier.  I became aware of the problem when some of my friends and fellow contest club members began complaining about it.

I emailed ACOM in Bulgaria and Ten-Tec in Tennessee, asking for help.

I immediately got replies from Stan, LZ1IU (I believe he was Tech Support Manager at the time), and Jack Burchfield, K4JU (the president of Ten-Tec at the time).

We (Stan, Jack, and a few users) worked together on this problem until the cause was found and a fix was made available to the customers/users.

The professionality and determination shown by ACOM and TEN-TEC in solving this problem is a great example of how companies can and should work together.  I sincerely doubt that any of the Big-3 'JA companies' would have cooperated like this!

To the best of my knowledge, only two ORIONs ever had the Choke-Mod installed; mine and Jack's.  All the rest were fixed with the external HPF.