As you pull the mast segements out, you will see RED safety markings.

These consist of several RED  vertical lines which warn you

that you are approaching the point where you must STOP.

The STOP point is marked with a Red Ring around the mast segment. 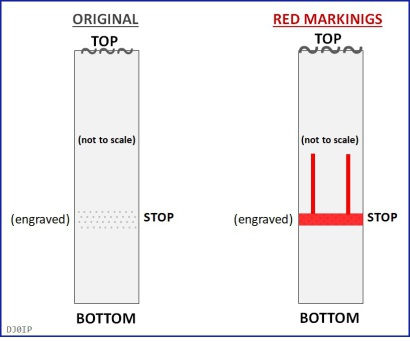 BEFORE erecting the antenna and mast, it is a good idea to examine each mast segment to see if the red markings are still clearly visible.  After a number of years, they tend to fade away.

If they are no longer visible, draw a new ring and lines using a RED SHARPIE or RED EDING STIFT.

If your mast has been extended for a few years, it is safe to assume the red markings are gone.  The STOP position is marked (as described above) but it can be diffical to find.  Here is an easier way:

TNX to Mike, VK2IG, for suggesting this method.

Saftey STOP Indicators
Here is a drawing showing what to expect when you look closely to the bottom of the pole. NOTE: if the red lines have faded away you can still see the dotted-ring engraved into the pole, about 6 to 10 inches up from the bottom.
Safety Stop Indicators.pdf
PDF-Dokument [168.1 KB]
.....(Search on THIS site.)