PART-1: The Effect of CMC on SWRmin

It was observed that the presence of Common Mode Current on an OCFD antenna caused the frequency of minimum SWR – hereafter referred to as SWRmin – to rise.  A test was devised to analyze this closer.

Note:  SWRmin ≠ Resonance;  it is typically 20 to 30 kHz higher than resonance.

Once the antenna was trimmed for 3.450 MHz, I removed the balun and inserted it about 30% from one end.  I soldered the wires together where the balun had been.

I measured SWRmin again:  It was basically unchanged, and the SWR was 1.95:1 at 3.450 MHz.  This was to be expected, as resonance does not change on a halfwave antenna, simply by moving the feedpoint.

IMPORTANT NOTE: Over the next two years I made and recorded about 500 measurements on the antenna in fig.1b, testing various baluns and balun/choke combinations.  Measurements made on the same antenna, but on different days would sometimes show SWRmin ±10 kHz from each other.  This was probably due to changes in the weather.

With this "stake in the ground" measurement of SWRmin,  we can now investigate several different baluns and balun/choke combinations and observe the effects of CMC on SWRmin.

Some additional baluns were tested but the results of testing these 9 baluns is sufficient to help us understand the effect of CMC on the antenna. The chart below shows a summary of what was measured above: 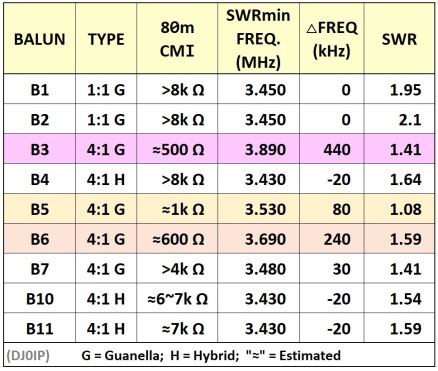 This chart clearly show us what happens to the frequency of minimum SWR (SWRmin) when the balun has insufficient Common Mode Impedance (CMI).

SUMMARY OF WHAT WE SEE IN THE CHART:

We shall ignore the 1:1 baluns because they do not match the impedance.

B5 is much better (than B3), even though it is built on much smaller Toroids.  It has too few turns of transmission line, causing its CMI to fall short of what is required to drop SWRmin to (or near) 3.450 MHz.

B6 is poor, but it has tiny little Totoids and just 10 turns per core. As stated above, we can only guess at its CMI, as I do not have a dual-port VNA.  However, despite these two points, it still performs better than B3, which has two FT-240 cores and about the same number of turns.  This is a clear indication that B3 is using the wrong ferrite mix for this application.

In summary, it seems an optimum dual-core 4:1 Guanella balun is very close on its own to being good enough.  Unfortunately, it also seems that none of the commercial balun OEMs have such a product in their portfolio.  Instead, they use Toroids with lower permeability and too few turns of transmission line.

At the time I began this field test (March 2015), to my knowledge there were no commercially available hybrid baluns.  I learned of the hybrid balun reading Andrew Roos' (ZS1AN) paper in QEX, however it seemed (IMO) to be built backwards.

B4 was my first attempt; my first experience ever with a hybrid balun.  Using the G3TXQ color charts, I designed the 1:1 Guanella for 8k Ohms on 80m.  I tested the 4:1 Ruthroff (voltage) balun on #61, #52, and #43 toroids and several different turn-counts, observing the SWR curve of each across the HF spectrum.  #61 was the clear winner.

To my pleasant surprise, SWRmin using this technology was very close to that of the antenna configured as a center-fed dipole.

B10 was my second hybrid balun.  I wanted to see if a very lightweight version would still fend off Common Mode Current.  As you see from the chart, it did; at least as far as SWRmin is concerned. Later power tests (into a 200 Ohm 'resistive' dummy load) were satisfactory.

B11 was my third and final hybrid balun.  It also had an SWRmin at 3.430 MHz.  Later power tests proved it to be ok for 600 watts (intermittantly: string of CW dashes at 5wpm for 10 minutes, with no warming).

In summary, it is clear that CMC causes SWRmin to skew up the band.  It also seems to be directly related to lack of CMI in the balun.  However, as we shall see in Part-2 below, this is not the only factor affecting SWRmin.

The hybrid balun technology seemed to work quite well with an 80m OCFD antenna.  During the summer of 2015, DL5CW used a prototype (with B10), operating OZ/DL5CW, winning 1st Place Overall World-Wide in the IOTA Contest ("Island Expedition Class"-CW).

HOW MUCH CMI DO WE REALLY NEED?

According to Tom Rauch (W8JI), there is no single answer to this question.  Different circumstances can require different amounts of CMI, sometimes more, sometimes way less.

My next test was to try and ascertain how much CMI is required, at least for "my OCFD" at "my QTH".   In order to do this, I repeated the tests above twice, first by adding a 1:1 Maxwell choke directly to each balun; then adding a 1:1 Guanella choke to each balun.  Here are the results: 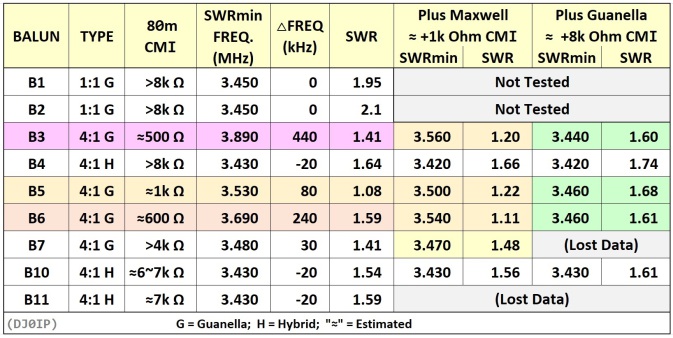 Note: B11 was tested in 2017, 2 years after I began these tests.  I cannot find where I stored the data when adding the Maxwell and Guanella Chokes.  Also lost some of B7 data.

B3, the commercial dual-core 4:1 balun, looked a lot better after adding the Maxwell Choke.  Adding the Guanella choke brought its results in line with the hybrid baluns.  Of course, this had basically converted it into a hybrid balun!

B6 was not very good on its own.  The Maxwell choke improved it, but SWRmin was still about 100 kHz too high.  The Guanella choke brought it in line with the hybrid baluns.

B7 was almost good enough; the addition of the Maxwell choke brought SWRmin within 20 kHz of where it should be.  Unfortunately I could not find the data for where I added the Guanella choke.  That test was in 2016 and now, 6 years later, I cannot recall the results.

B4 and B10,  did not improve nor change much with the addition of the chokes.  This indicates that they were already good enough.

CONCLUSION OF PART ONE:

From these tests, based on knowing the actual frequency of minimum SWR (SWRmin) of the antenna from testing it as a normal center-fed dipole, it is clear that:

PART-2:  ANOTHER TEST TO SEE IF CMC IS ON THE FEEDLINE

As a result, measuring the SWR at different places along the feedline shows different results, albeit the difference is small whenever the feedline impedance is a close match  to the feedpoint impedance (i.e., <2.5:1).

Note: these tests were run 5 to 7 years ago.  In some cases I cannot find where I saved the data.  I am certain I tested this; I just misplaced the results.

B3 was already determined in Part-1 to have CMC issues. Here we see that adding just 20 ft. of coax caused SWRmin to skew 210 kHz downwards.

This is significant!  And BAD!

We don't want SWRmin to change every time we connect a different length of coax to the antenna.

B5 also skewed slightly, but up the band 20 kHz.

B4 and B10 also skewed higher in frequency, but only 20 kHz.

Fundamentally there were small changes in SWRmin and level of SWR in all cases but most were quite small.  B3, which has by far the lowest CMI, had significant changes. This would be very bad if the antenna is to be used portable.

It has been seen by measurements on real antennas, not modeling, that baluns with low SWR result in significant levels of Common Mode Current.

The belief that only 500 to 1000 Ohms of CMI is all that is required for an OCFD balun could not be substantiated in these tests.

To the contrary; it appears that at least 4k Ohms of CMI is required. Few 4:1 current baluns can achieve this amount.

The antenna was erected pretty much in the clear.  In installations with nearby obsticles, even more CMI will be required.

As a result, it is my opinion (and just my opinion) that 6k Ohms of CMI should be the target for our OCFD baluns.  8k Ohms is easily obtainable with a single 1:1 Guanella, so that is my recommendation.

I WELCOME ALL OTHER INTERPRETATIONS OF THE ABOVE.

ALL of the measured data is available in individual files that may be viewed in the freeware software "AntScope" from RigExpert.

ALL CMI values were based on G3TXQ's color charts: