Further tests were made throughout the summer of 2015.

ORIGINAL DATA FILES may be viewed through the freeware software "ANTscope":

The wire legs were connected directly to an SO-239 with 2cm pigtails.

All tests beginning with B2 use  brand new RG-58, 1/2 wavelength long.

Preliminary Test List of Tests
This files shows the name of each test. Use this list to find the associated data file of each test. View these files with RigExpert's ANTscope freeware software. Sellect "AA-54" as the analyzer type.
Work for 25.JUL.2015.xlsx
Microsoft Excel-Dokument [15.0 KB] 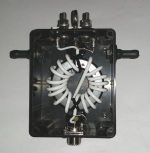 The same wire legs as used above were connected to a B1 and the same suite of tests were run again.

All tests beginning with B2 use brand new RG-58, 1/2 wavelength long.

Zipped Collection of all B1 Tests
List of all B1 Tests. Use this list to find the associated data files of each test.
Work for 25.JUL.2015.xlsx
Microsoft Excel-Dokument [15.0 KB]

This choke balun consists of :

One half wavelength (on 80m) of RG-58 coax was used for this and all further preliminary tests.

B2 Data Files, Zipped
View the contents of this file with RigExpert's ANTscope software, and set the analyzer type to "AA-54".
B2.rar
Komprimierte Archivdatei [15.7 KB] 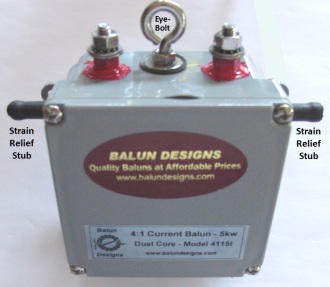 One half wavelength (on 80m) of coax was used for this tests. 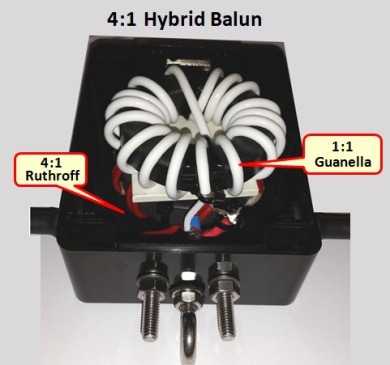 This Balun consists of a 4:1 Ruthroff Balun preceded by a 1:1 Guanella Balun.

In this case, the Ruthroff is just a transformer and the Guanella performs the duty of the balun.  Neither alone is sufficient on its own to both match and impede Common Mode Current.

One half wavelength (on 80m) of coax was used for these tests.

B4 Data Files, Zipped
View the contents of this file with RigExpert's ANTscope software, and set the analyzer type to "AA-54".
Balun B4.rar
Komprimierte Archivdatei [15.7 KB]

Consisting of 2x Ferroxcube TX 36/23/15-4A11.  These cores are nearly identical to FT-140-43, except these have a thin epoxy coating on the outside surface. Their beginning permeability is 800.

Its SWR curve across the hf spectrum is as good as any, which negates the "theory" that twisted pair won't work in baluns. 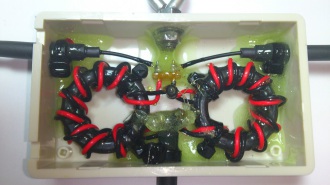 The balun pictured on the right is from my 40m OCFD, but nearly identical to the one used  in these tests on my 80m OCFD.  The 80m OCFD uses 2 additional turns of wire per core. 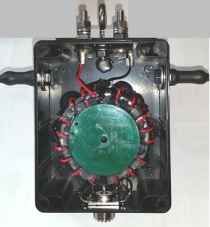 B7 Data Files
This zipped file contains all of the data files for B7 in the Preliminary test. Individual files may be evaluated using RigExpert's ANTscope (freeware) software.
B7 Preliminary.rar
Komprimierte Archivdatei [15.7 KB]

This 2-Core Balun consists of:

Note:  This balun was tested in the very beginning, before I had decided to do this Battle of Baluns test.  This test is not as comprehensive as the tests later outlined for BoB, but the data is of some significance and has been included for the purpose of completeness.

The build quality of this LDG balun is nothing short of pathetic.  The wires inside are only enamel insulated, the device is not 100% waterproof, and the hardware is not even stainless steel.

I cannot recomend this specific balun, however the measured results of the combination of this balun and the 1:1 Guanells choke look very good. 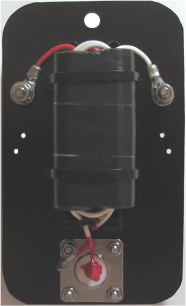 Sorry, no further details about this balun technology are available at this time.

B9-BOL BALUN ONLY WITH 1/2 WL OF RG-58 COAX
This file shows an initial scan of all bands plus 80 and 40m. It compares resonant frequency and SWR of the antenna with just the balun, balun plus Maxwell Choke, and balun plus Guanella Choke.
B9-BOL.rar
Komprimierte Archivdatei [16.0 KB]

This mini-hybrid balun consists of a 1:1 Guanella balun on the coax side and a 4:1 Ruthroff balun on the antenna side.

The table below shows the results of the measurements. 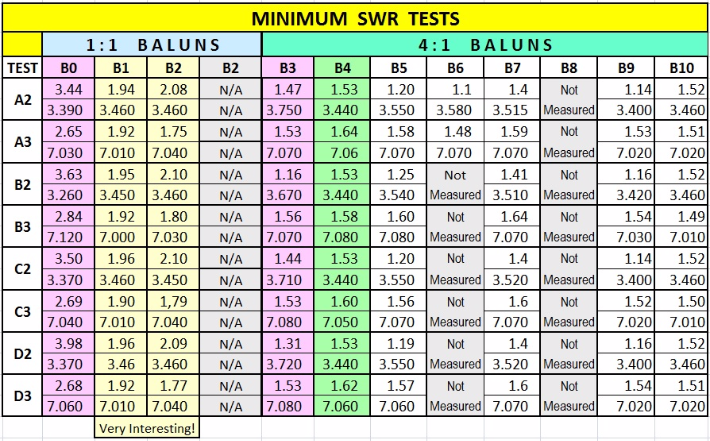 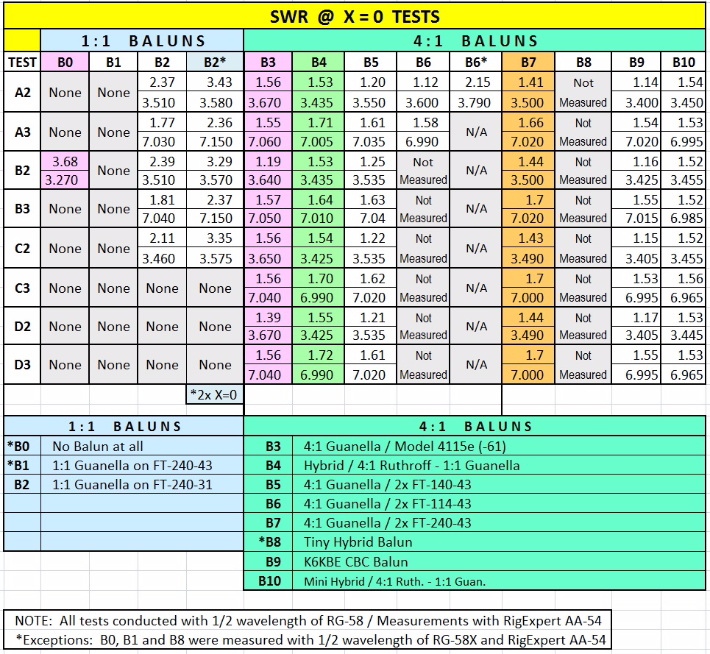 Look closely to the resonant frequency in Test A2.

This is where the analyzer shows as the point of minimum SWR.

You will find big differences in the frequencies used in the line for A2.

The only baluns that are pretty much spot-on as showing resonance here are the two Hybrid Baluns (B4 & B10).  B9 also seemed very good but shows a curious result for test D2.

Later, B11 and B12 were tested.  They are the same design as B4 and B10, but with different size toroids.  Their test results were nearly identical to B4 and B10.

Note:  by the time I tested B10, B11, and B12, each wire leg was about 5cm shorter than they originally were - due to occasional minor triming when swapping baluns in and out.

All other results are being skewed by the presence of CMC.

The farther away (higher) in frequency AR is from 3.440 MHz, the more problems that balun has with CMC.

This will be much more apparent when we follow the results of the Comprehensive Tests.

For now, all the data has been uploaded so anyone who wants to may do their own analysis and make their own conclusions.

ONE THING IS CERTAIN:  The commercial OCFD Manufacturers as well as the Balun Manufacturers need to do some more research and then go back to the drawing board.  Their baluns ALL have insufficient Common Mode Impedance (CMI) for an 80m OCFD that is erected less than 15m high.