My QTH is not conducive to ham radio.

But as Forest Gump's mom said:  We have to play the hand the good Lord delt us.

So, I have erected an Inverted-L antenna for 160m just on the edge of the forest, about 80 meters away from the house.  The vertical radiator is about 17 or 18 meters high, and the horizontal portion, which runs diagonally up hill, is somewhere between 25 and 30 meters long (I think).  I don't know.

Why I don't know is a long story having to do with an unexpected snow storm and slipping and falling while erecting the antenna - which brought the installation to an abrupt end.  It is also next to impossible to drop the antenna and measure it.  When you see it, you will understand why.

Now to the antenna: 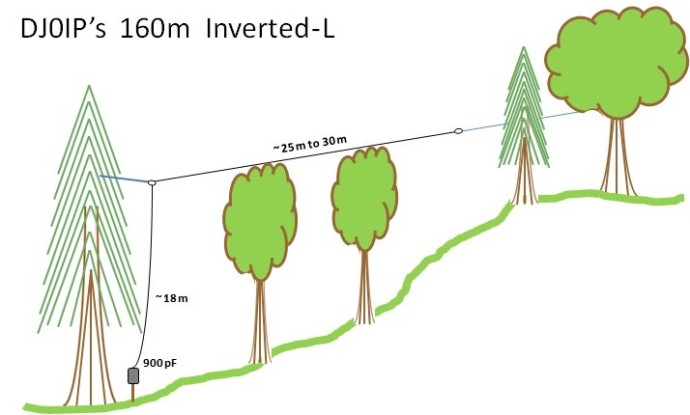 until you view it in real life!

The "real life" situation is why I only have one single elevated radial installed, running straight back through the woods. 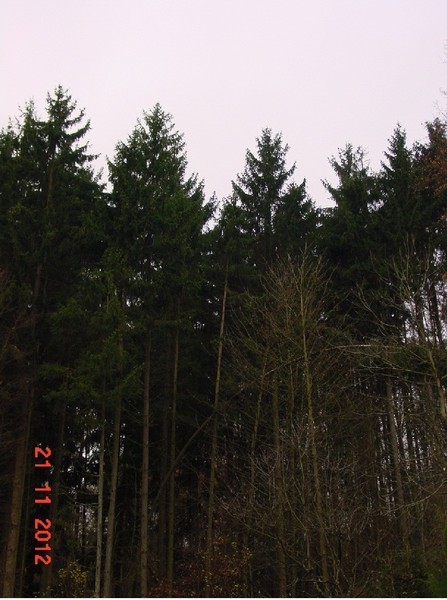 The ground below all of these trees is covered with a jungle of stinger-weed (stinger-nettle) and briar-like plants, making it impossible to walk through.

In the summer, the dense stinger-weeds are taller than I am.  There is simply no way to go back in there.

It is impossible to walk straight up the hill from the base of the antenna due to the thick briar bushes.

To get the horizontal wire over the tree tops, I first ran it back towards the house, attached it to the top of a 40 ft. Spiderbeam fiberglass telescoping pole, then walked up the hill near the house, holding the fiberglass pole vertical.

This enabled me to clear most of the branches in the tree tops.

After the wire was secured, I spent another day fishing it out of the tree-tops with the help of the long fiberglass pole.

THE CURRENT STATE OF THE ANTENNA (RESULTS):

DJ0IP's 160m Inverted-L, October 2012
This shows real life pictures of the surroundings of the antenna, plus the steps of the tuning/matching process.
The 160m Inv-L Story.pdf
PDF-Dokument [822.4 KB]

Inside the Shack RESULTS (October 2012)
This shows what the SWR looks like to the transmitter, at the end of 100m or AIRCELL-7 coax, plus about 20m of LMR-240 feeding from the remote antenna switch, into the house.
In Shack 160m Inv.-L Measurements.pdf
PDF-Dokument [113.7 KB]

The rope supporting the apex of the "L" to the tree broke during a storm in July 2013, causing the wire to fall into a patch of tall stinger-nettle.  I waited for the cold WX to get here before going back into the woods to repair it.

Since the wires were down and tangled in the trees, that gave me a chance to shorten the horizontal segment.  I shortened it by about 5 meters.  As it turned out, that was not enough.

Afer two attemps shooting my "EZ-Hang" into the top of the tree, I managed to get the rope about 2m higher than last year, which resulted in the vertical radiator being 1m longer than last year.

Of course I had to re-match the antenna at the feedpoint, and I got some very strange results. Although I was expecting to have to reduce the amount of capacitance in order to re-match it, I ended up needing twice as much capacitance.  I have no idea why.  I even double checked by using a second (different) antenna analyzer and a different L/C meter.  Very curious indeed!

I am open to suggestions from anyone as to why that is.

My antenna is only slightly better matched than last year.  Peanuts.

Its biggest problem is the lack of more radials.  Just one more elevated radial running in the opposite direction of the first would give me a big increase in efficiency and probably drop my ground resistance several Ohms, thus lowering my SWR.  The antenna's impedance is currently about 73 Ohms. Unfortunately I am unable to run a radial in that direction, as it would be running directly through the yard, towards the house.

Of course the real solution would be to drop the antenna again and shorten the radiator.

No way I am touching it before the upcomming CQWW contest.  It took me 2 days working alone to fish the wire completely out of the tree tops.

It is what it is.  I just have to play the hand the good Lord delt me!