In my opinion this is one of the most misunderstood subjects in amateur radio.  But how can the average ham be expected to understand this when most of the transceiver manufacturers don't even appear to understand it.

I can only guess at the reasons why this is so.  I will explain what I think to be the reasons below.  But first I'll show the timing suggestion.

Fundamentally it is very simple:

The picture below shows a typical example of what the timing should look like.  THE DRAWING IS NOT TO SCALE - (but close). 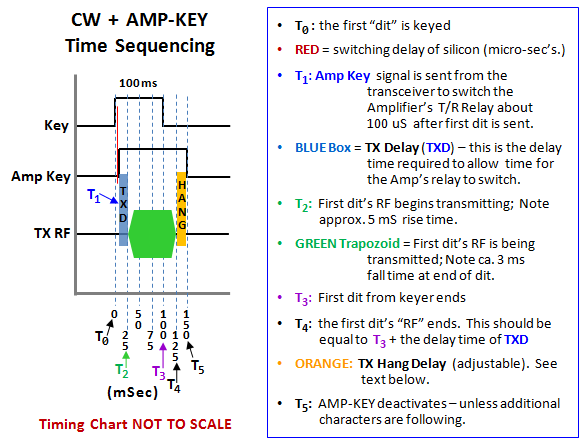 At T0, the first dit is given from the paddle.

Most modern transceivers use solid state switching (open-collector switching) instead of a relay to key the "AMP-KEY" line.  The AMP-KEY signal is the signal used to tell the linear amplifier to switch into Transmit (TX) mode.

Solid state (silicon) switching with a tiny delay of a few tens of micro-seconds activates the Amp-Key line, and  at the same time, pre-dit delay (TXD) counter begins.   TXD (BLUE BOX in the timing chart above) is a delay time added to allow the amplifier’s  T/R relay to switch before sending RF to the amplifier.

Note:  switching delay shown above is approx. 100 uS and the Pre-dit delay (TXD) shown there is approx. 25 mS delay - but TXD is usually adjustable in modern transceivers.

Silicon switching time will vary with the capacitance of the circuit, but it is always very fast compared to relay switching.  Unfortunately there is one other factor which I will explain below.

TXD is set long enough to allow for safe switching of the Amp’s T/R relay.  How long that is depends on the amplifier.  Thus it is VERY IMPORTANT for the user to understand his/her amplifiers requirements.

The T/R relay in the Amplifier has some average switching time (+ bounce time), whose length depends on the type of relay used.  Typical values are about  7ms for vacuum relays,  12ms for fast non-vacuum relays, and 20ms for old open-frame relays -as used in most Ameritron amplifiers unless they have the optional QSK-5 built in.

Bounce time can be as much as 2ms - again depending on the type of relay used.

Finally, there is one more delay factor the we must compensate for - "diode delay." Most relay manufactures fail to mention this, but occasionally the serious ones will point it out in their spec sheets.  IMO most of the amplifier and transceiver manufacturers are not even aware of this additional delay.  It is common practice to place a "flyback diode" (reverse-biased diode) accross the 12v relay coil.  It protects the relay's coil from voltage spikes.   Though this increases reliability, in the case of most open frame relays it adds another 2mS to the delay.  The manufacturers would do well to look up "flyback diode" on WiKi.

THUS TXD for open-frame relays should be at least 22 mS.   It is good practice to have an additional 2ms of “reserve delay” for safety -  better yet, 25 mS as suggested above in the drawing.

Fundamentally we need 3 different TXD times:  10ms / 15ms / 25ms when we want to work full QSK.  Which one we use depends on the type of relay the amp uses.  If Semi BK is to be used, the best compromise is to simply use 25ms TXD all the time, so that the transceiver will work with any amplifier that can be switched with 12vdc.

Hang Delay Time is set to whatever is convenient to the operator.  As a minimum it should be the same length as TXD, but usually 200 to 500 mS is desirable to prevent relay clatter.  My personal preference is to set it at about 100 mS when calling DX in a pile-up or working contests, and to set it to about 500 mS during normal QSOs.  Setting it at 500 mS avoids relay chatter almost completely, enabling (IMO) a much more stressless QSO.  You mileage may vary.

Because there is no one "right" delay time for this paramatur, it is best to have it adjustable.  Several keyers offer this feature, but you need a computer to adjust the setting.  Personally I don't like having to use a computer to make an adjustment on my radio.  Therefore I have opted for an external keyer that has front-panel adjustments for TXD and Hang Delay.  But this is user preference.  Choose your own poisen! (hi)

do not seem to understand:

IMO most transceiver and amplifier manufacturers interpret Relay Manufacturers' switching time specs wrong.  The value listed as average switching time is NOT anywhere close to the real life switching times when the relay is trying to follow CW keying.  In addition they seem to ignore bounce time and diode delay (see above) which in the case of open-frame relays (like Ameritron uses) can add up to 4 mS of additional delay to the switching time.  In other words, they seem to be naiive enough to believe the gas mileage printed on the window sticker of new cars.  They fail to read the small print of the specs which says "your mileage may vary."

Looking at the Ameritron T/R relay as an example, it is specified with an avg. switching time of 15mS.  We must add in 2mS bounce time.  So, we could expect 17mS when switching active.  When releasing, we must add on the 2mS diode delay.  This together with bounce time brings us to 19mS.  In our measurements, we were often seeing 20mS and occasionally as much as 22mS delay.  THIS idifference between 17/19 mS is due to inertia latency when used for keying CW.  Seems to me it should be obvious but apparently the manufacturers aren't interested in this.

CPU LATENCY:  Many of today's transceivers are completely controlled by microprocessors.  This has advantages but also hazzards if the programmers and their hardware engineers do not coordinate ALL THE TIME.  Earlier I spoke of switching latency of silicon, and how it should be in tens of microseconds, then I showed 100 uS in my example.  That's because the command to execute an instruction comes from a central processor which itself adds latency.  Each time a firmware update is created, testing shoud be done to insure that the changes did not add additional delay to the various CW time seqquencing parameters.

TEN-TEC is a great example of how a good timing schema can be botched up by a poorly executed firmware update. In one of their firmware updates to their Eagle transceiver, the activation of the AMP-Key line which should occur in silicon switching time (mS) was botched so badly that it slipped out to 7mS.  This is disasterous!  Two or three years later, this was finally fixed with a firmware update.

What most hams don't understand about

Before I begin, I will point out that I am not criticizing the hams themselves.

How can hams understand this when the manufacturers don't?

Hams generally make several mistakes when it comes to interfacing transceivers and amplifiers:

1)  They tend to generalize and think there is a "One Size Fits All" solution to their problem.

2)  They fail to understand that there are major differences in how different transceivers switch and interface to amplifiers.

3)  They fail to realize that switching requirements may vary depending on mode of operation and operating preferences:

4)  They fail to realize that there are MAJOR differences in different types of amplifiers: