40m Vertical on a 12m Spiderpole

For people (like me) who hate fussing with radials.﻿ 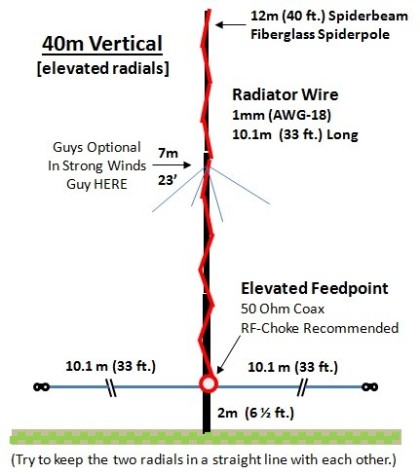 In the drawing above, the radials look shorter, but they are the same size as the radiator wire.﻿

I have lived in at least 25 different houses or appartments since I was licensed in 1962.  Most of my life I have rented my house or appartment, I was not the owner. ﻿ When I install an antenna, I know it is not going to be perminant.  In these cases, I find it more convenient (and cheaper) to use elevated radials.

ELEVATED RADIALS ARE RESONANT, AND MUST BE MEASURED ACCURATELY.

IMPORTANT:  ALL ELEVATED RADIALS MUST ALL BE EQUAL LENGTH, AND EXACTLY 1/4 WAVELENGTH LONG.

The antenna presented here is neither better, nor worse than a standared quarter-wavelength vertical which uses ground radials.  It's just a different way of installing the quarter-wave vertical.

For Campers:  This version of the 40m vertical antenna is also good for using at places like campsites where radials would be laying on the ground, and not burried.  Pedestrians walking around the vertical can easily trip over ground mounted radials, but can walk under the elevated radials.