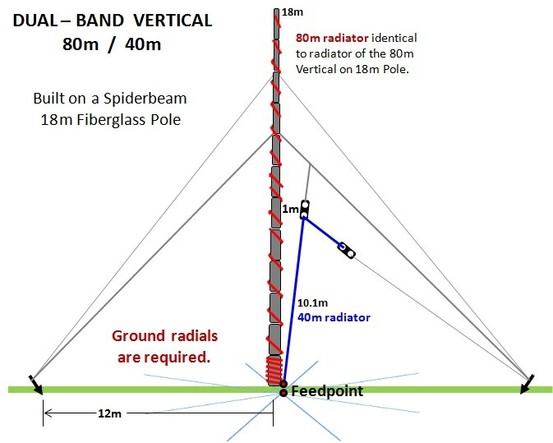 The two wire radiators require a small amount of separation.  1m, as shown in the diagram above, is usually sufficient.  The top on the 40m vertical wire will have to be folded back down along the guy rope because it is a little to long to terminate at the guy rope.  This does not hurt performance.

As always, it is good to feed the vertical through a CMC Choke.

Since the antenna is basically a full size vertical on both bands, tuning is simple and straight forward.

There are a couple of simple rules to follow:

*Wires running along side a fiberglass pole incur a tiny change (reduction) in their velocity factor.  If they run parallel to and against the pole, it is about 1%.  If they spiral slowly down the pole, which is the best method to mount them, it is about 2%.  This means if you cut the 80m radiator according to the formula, it will be 1 or 2% too long, which is what you should initially target anyway.  Then you can shorten it as needed.

See the monoband 80m Vertical page for more details.  The 40m radiator's velocity factor is not affected by this because it is far enough away from the pole.

CAUTION:   Do NOT use Carbon-Fiber poles.

For vertical antennas, it is MUCH BETTER to use pure fiberglass poles.﻿  It is said that Carbon-Fiber poles absorb too much RF.  Although I have not personally tried this, it has often been reported that a wire tightly mounted on a Carbon-Fiber pole has up to 2 S-Units of loss, compared to running that same wire a few inchs away from the pole.

As stated above, it is important to tune 80m BEFORE tuning 40m.  Although it is easy to telescope a fiberglass pole up and down, once the 80m radiator has been tuned, you won't want to lower the pole to adjust the length of the 40m radiator. 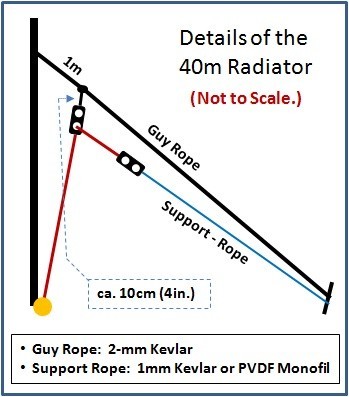 Radials are VERY important for the efficiency

of this and every quarter-wavelength vertical.

A simple ground stake, or 1 or 2 radials per band is NOT ENOUGH.

If you want good results, you need at least 8 radials.

Sure you will read papers stating that you need 100 radials to get maximum efficiency from your vertical.  No arguing that point, but what is misleading about that is, the return on investment after about 32 radials is very little.  In fact 16 radials is already quite efficient and 8 radials is usually good enough for temporary portable operations.  Of course more is better.

Ground-mounted radials do not have to be resonant.

In fact it is better to have several short radial than a few long radials.

Radials should be anywhere between 1/8 and 1/4 wavelength long.

The length is not critical, as long as it is at least 1/8 wavelength long on the lowest band.

If you put down 10 radials this length, you will have a good working vertical on both bands.

If time and circumstances permit, of course it is better to use a few more.

If possible, spread the radials symmetrically around the vertical.

If you are unable to do that in all directions, then just do the best you can.

Basic instructions for the dual-band 80/40m Vertical
This document is not a step by step assembly manual, but it does show all of the necessary information to enable you to duplicate this antenna.
Dual Band Vertical 80-40.pdf
PDF-Dokument [292.6 KB]