In the drawing above: 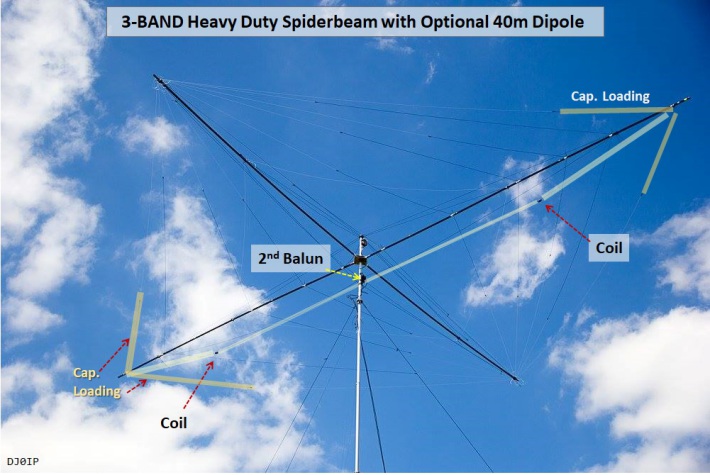 Sorry, it is nearly impossible to obtain a good photo from the ground.  I have highlighted the 40m Add-On bits.  The photo above shows the option of having a second balun.  Here the dipole is below the boom.   When you use only one balun, the dipole is above the boom. 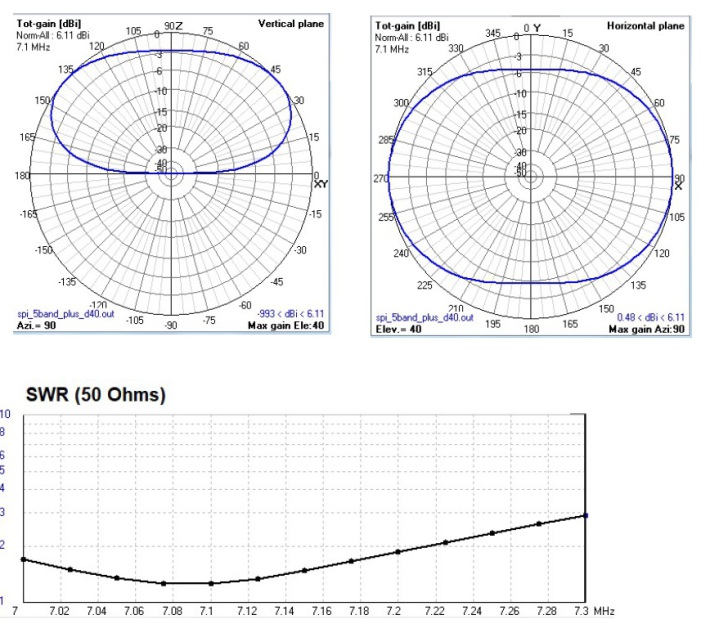 The graph above shows the SWR curve across the 40m band.

The dipole is rotated 90 degrees to avoid interaction with the higher bands.

A critical eye will notice that the dipole is not completely symmetrical.  The capacity-hat wires are of different size.  This was necessary to avoid interaction on 10m and is non-critical to performance on 40m.

The dipole will work with the Portable and/or Heavy Duty versions of the Spiderbeam, regardless of whether they are 3-Band or 5-Band versions.  IMPORTANT: You must specify which version of the beam you have because the clamps and tube-size are different, depending on version.

Of course the turning radius of the antenna is slightly longer - but the difference is less than one meter (about 30").

The dipole will work with:

The original beam was constructed such that its two extension tubes slip down inside of the ends of the Heavy Duty Spiderbeam Yagi's boom tubes.  The extension tube is simply the top segment of the Spiderbeam 12m telescoping fiberglass pole, with a few layers of heat-shrink tubing (abt. 15" long) over the bottom end.  This is built up in layers until it fits snugly inside of the ends of the beam's boom tubes.  The thin extensions extend about 83cm (~33 in.) beyond the current tips of the boom.

The user may decide him-herself whether to attach the dipole to the same balun as the other elements or to use a separate balun.  The separate balun is identical to the original balun.

The normal front-to-back ratio is not affected by the addition of either feed method.

The 40m dipole will become a standard Add-On product which may be added to any version of the Spiderbeam Yagi's at any time.  When it becomes available, it will be listed on the Yagi page of Spiderbeam's two web sites.

It is fine to purchase the beam now and the add-on later when it becomes available.

There is no additional work required if you purchase the dipole later, other than lowering the antenna too do the work, then raising it again.

There is no advantage in waiting to purchase the beam.

ESPECIALLY if you wish to purchase a fully assembled beam, it is better to do that now.
We are currently in the July/Aug/Early-Sep  European summer vacation slump and the boys at the factory have time to build beams.  In October they will be back in full swing so the delay will likely be a bit longer, unless you order the beam in its Kit version.

DISCLAIMER:   All of the above is subject to possible changes.

Drawings with Dimensions for 40m Add-On Dipole
This drawing shows the exact dimensions of the Dipole at different stages of construction. The primary radiator (CQ-534) should be very close (each dimension shown might be one cm off - not critical -). Final tuning is performed on the capacity loading wires. (Date: 18-APR-2019)
Measuring 40m Dipole Components.pdf
PDF-Dokument [268.3 KB]
.....(Search on THIS site.)